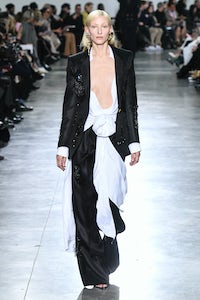 PARIS, France —  “I’m brand new to this world,” said Daniel Roseberry of his exploration of haute couture via the house of Schiaparelli, “but I’m enjoying it as a voyage of discovery for me.” He’s taken on some pretty high profile crew members. Beyoncé and Michelle Obama are already Danny’s girls, and a recent getting-to-know-you trip to LA generated 30 appointments in just over 48 hours, so it’s safe to assume that someone as signif as Queen Bee is going to be wearing him on a red carpet near you soon. For his part, Roseberry is as humble, ridiculously handsome and slightly weird as ever. On his mood board: a J.Crew ad, Cher, an Annie Lebowitz portrait of Isabella Rossellini and David Lynch when they were dating… "Things I feel personal about,” he explained. “Like ‘Blue Velvet.' Is it a dream, or a nightmare? That’s my whole life in Paris.”

Right now, I would imagine it’s more dream. Roseberry said that, with his first couture collection for Schiaparelli, he’d wanted to change the conversation about the brand right away. That created a pellmell too-muchness that sold him a little short. So his tyro collection has been a reality check. He’s been meeting clients, appreciating what it is they want and need from him, and he’s come up with the idea of the double fantasy: the dressed-down day, the high-performance night.

“I’m obsessed with Elsa Schiaparelli’s dual personalities,” Roseberry confessed during a chat before his show on Sunday. “She wore rigorous suits by day, then she’d go out at night dressed as a radish or something. That inversion feels super-modern to me.” He used the Schiap catwalk to give human form to what he meant. One word: “pantsuit,” with all the accessibility applied by the term. After his decade at Thom Browne, Roseberry should at least know his way round tailoring. The innate sobriety of his menswear experience informed the black tuxedo that muse Maggie Maurer wore to open the show, or a navy wool suit that he dressed with chains. But the same restraint could also be traced in a dress that gorgeously draped black wool crepe and navy silk georgette.

J.Crew was on Roseberry’s mood board because he’s American, and healthy, athletic bodycon is in his design DNA. Here, there were fitted little sheaths in sporty stripes that erupted into a flurry of bows, or a long train. A “bathing suit” bustier was attached to a skirt that was a huge cloud of pink silk faille. That single look offered a reasonable summation of Roseberry’s wellspring: growing up in Texas, young Dan fantasied about Christian Lacroix's 1990s couture as much as J.Crew’s All-Americana.

But don’t forget, I said he was a little weird too. Inescapable in his new collection was the jewellery which crept over everything like a glittering golden virus. “It’s an organ, as essential and vivid as a heart or a lung,” he wrote in his show notes. All the Dalí-esque doodads were where Roseberry came closest to Schiaparelli herself. “Psycho-chic” he called it. As he builds on that, the brand will truly be his.