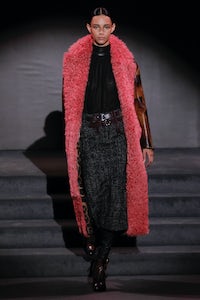 NEW YORK, United States — This was a good week to be Tom Ford. Last Friday, his new movie Nocturnal Animals electrified the Venice Film Festival. Then, on a steamy Wednesday night in New York, he entertained the fashion world with the presentation of his collection for Autumn/Winter 2016 during a dinner for 180 guests at the Four Seasons restaurant. Yes, that’s right. While many of his peers were already delivering their looks for the new season, Ford was only now showing his.

But the elite eats were actually the pretext for an online spectacular with production values worthy of the Oscars, using 22 cameras and a team of award-show veterans to capture not just the catwalk, but every stray glance from Ford’s coterie of famous fans, every flicker of backstage action.  The models had their own cameras, the images immediately uploaded and edited. There was even a ten-minute arrivals sequence.

This was See Now Buy Now in Cinemascope, the most sophisticated expression yet of an idea that has been vexing the industry for a year with its pros and cons. In a first for fashion, Ford made his entire collection instantly available, online, in his own boutiques, and in stores like Bergdorf Goodman and Harrods, where the clothes were already secretly stowed away, waiting to be carried overnight onto the shopfloor and into window displays, in a operation that was planned and realised with an almost military precision and an according degree of confidentiality.

The buyers came in on schedule, they bought, they signed non-disclosure agreements. There were no pictures. They could see and buy, that was it.

There was no preview of any kind. “You send out an advance collection and it ruins everything,” Ford told me on Tuesday during fittings at his temporary atelier. “The hair and makeup see it, the stylist takes a photo and the dress ends up at a movie premiere you didn’t give them permission for. It happens all the time. Once you let the cat out of the bag, then the cat’s out of the bag.”

Ford designed the collection six months ago, “just as everyone else does. I put it together into looks, just as if I was doing a show. The buyers came in on schedule, they bought, they signed non-disclosure agreements. There were no pictures. They could see and buy, that was it.  Then I put the collection away.” He insisted that it’s what he tried to do with his first solo show. “But no one understood it, I did it the wrong way. I tried to block the press so no one could see it till it was in the stores. This time, I did the same thing but I used the Internet to shoot the message out when it hits the stores.”

Now, the whole point of it is sales, sales, sales. I’m even more excited about the clothes because they’re going online and we’ll see the sales

Either way, it’s hard to imagine a control freak as absolute as Tom Ford being unable to fiddle till the moment when the first model steps out on the catwalk. But it sounds like he rather enjoyed the restriction. “I’m coming from Venice, I’m on my way to the Toronto Film Festival, if I’d had the stress of how to figure out the shoe of the season, I’d probably have put a bullet in my head.”

But you wanna know stress? After Toronto, Ford flies back to LA, where he has two weeks to finish the next collection that he’ll show in February. “I’ve set up a design studio in LA so I’m making everyone from London fly over with samples, and I’ll put together the show I’ll present in February. Then that will travel back to London where it will be bought by all our buyers and sent to all the stores."

“Who knows, maybe it won’t work,” he mused. “But I think it will work for the consumer. It was interesting designing it because you’re used to thinking, ‘We’ll probably only sell three of these in New York, four in LA, two in London, but magazines are going to love it because there’s lot’s of colour to be photographed.’ But now, who cares, because the whole point of it is sales, sales, sales. Yet it does have to be interesting enough that it’s still fashion, it does have to be photogenic enough that it reads online.”

I think I’m a good storyteller. At a dinner party, I’m good at reading when to insert a little fib and pump the story up. It’s the same with a show. You open with three strong outfits, and you wrap it up in a way that repeats that opening.

And, for himself, he agreed that it’s ultimately a way to stay engaged with fashion. “I think everyone needs to be engaged. If you’re 25, maybe you’re engaged because you want to find the perfect t-shirt.  If you’re my age, and you’ve been looking at the perfect t-shirt for 30 years and in business for that long, you still need to be excited. It’s my way of staying excited. It doesn’t mean I’m not excited about the clothes. In fact, I’m even more excited about the clothes because they’re going online and we’ll see the sales.” At the same time, you sense the charge he must get from having Alicia Keys crooning Fallin’ on the soundtrack while the singer herself is sitting ringside at Anna Wintour’s table during his show. Like the very best directors, Ford can make things happen.

Or, as he said, "People are either good storytellers or not good storytellers, and I think I’m a good storyteller. At a dinner party, I’m good at reading when to insert a little fib and pump the story up. It’s the same with a show. You open with three strong outfits, and you wrap it up in a way that repeats that opening. Then you’ve got a good show. It’s like a movie too. You’ve got to suck people in, then you’ve got to satisfy them.” So, because no detail is too small for the designer’s consideration, it probably meant something that that the show played out to K.D. Lang’s Constant Craving.

The elephant in the room is the movie career which promises, if early critical evaluation is any indication, Oscar nominations at the very least.  It’s been a surprising seven years since the delicate chamber piece that was A Single Man, and Nocturnal Animals is a much bigger beast in every way. “Writing it was more complex,” said Ford. “There were many locations, lots more actors, more psychology in dealing with them. You’re a referee trying to deal with everyone’s egos and idiosyncrasies and keep them all flowing.”

But the process has clearly revved him up. “When you’re excited about what you’re doing, it infuses your whole life with excitement.” And that includes his career in fashion. When I reminded Ford that there was a moment a few years ago when he expressed doubts about his decision to remain in the industry — that he felt it getting in the way of his true passion, film-making — he was taken aback. That moment has clearly passed.

So what was the report card for Wednesday night? Ford called it a continuation of what he’s shown for the last few seasons. “I think one thing we’ve lacked with womenswear was a consistent image.” The first look — pencil skirt, boots, Jane-Fonda-in-Klute shag cut —  created an instantly winning, peculiar sense of character. The same elongation carried throughout the collection, skirts long, fitted, but slit high, often paired with voluminous, caped-back tops, creating a 40’s couture-ish silhouette.

I gave the world my taste in the mid-90s: streamlined, sexual, sensual, luxurious, minimalist, glamorous. You can only do that once.

Waists were caged in leather, the sort of light S&M detail with which Ford has often spiced his collections. There were jackets in colour-blocked velvet, skirts in panels of sequins, and a coat in gilded fur. Then there was Amber Valletta, who must surely be Ford’s dream model, in a gown of draped black velvet, with python boots and a chunky gold chain slung down her back. The calculated decadence of the whole thing felt a bit Berlin, not necessarily Weimar-era loucheness but still redolent of a kind of glittering, opiated heaviness.

It was striking how inconsequential the lounge lizard-y male models were in their turtlenecks and graphic velvet jackets (gorgeous though the jackets were). In Ford’s world, men are boys. Women rule. That sounds like a very sales-friendly formula, which is maybe why retailers were exultant as they left the building.

The thing that an audience expects of Tom Ford will always be sex, something along the lines of the revealing sheath that Naomi Campbell was wearing in the audience. Try to imagine what being dogged with that expectation must be like. “I think you get to give the world your taste as a fashion designer once,” Ford told me, not sounding at all resigned. “I gave the world my taste in the mid-90s: streamlined, sexual, sensual, luxurious, minimalist, glamorous. You can only do that once.”

Really? Yes, really. Ford insisted that sex in his collections has been off the table since he stopped drinking seven years ago.  Still, his femmes will always be fatale. “I remember one time Valentino saying to me, ‘That is my taste, I’ll always like it and if it’s out of fashion right now, I don’t care’. I’m like that. I repeat that to myself sometimes and I think ok I could try to do something that wasn’t me or I could just keep doing what’s me, even if maybe this year it’s not so hot. You have to do what’s true to yourself….” Ford thinks for a moment… “But if we’re having a 90s renaissance I’m right there.”