The designer aimed to entertain his weary audience with more than just clothes. 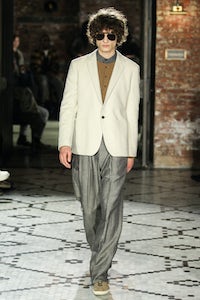 The designer aimed to entertain his weary audience with more than just clothes.

NEW YORK, United States — On Monday night, just as President Donald J Trump fired acting attorney general Sally Yates after she directed the Justice Department not to defend his executive order on immigration, Billy Reid gave a small audience in The Cellar at The Beekman Hotel a much needed antidote to a poisonous series of events. The Florence, Alabama-based designer offered a kind of solace through self expression, staging a runway show accented by a series of short performances, starting with blues musician Cedric Burnside donning a handsome overcoat of plaid brushed wool. He was followed by actor Alex Sharp’s rendition of "Avenue A" by Beat poet Frank O'Hara, the Watson Twins, and Karen Elson, who looked very much at home in a suede duster.

There was plenty of intention behind the evening’s proceedings. Reid, who hosts a fashion-food-music festival every summer in Florence called Shindig, wants to take his show on the road. Serving as the earnest opener to this season of men’s shows in New York, the event was a testing ground for ones he’d like to put on elsewhere. The Beekman Hotel, where client Tom Colicchio cooks upstairs at his restaurant Fowler and Wells, couldn’t have been a more appropriate a venue. “I wanted to do something that was not just about showing clothes,” he said backstage.

Indeed, Reid’s brand is as much about hospitality as it is about the apparel he designs. It’s not unreasonable to think he might easily do his own hotel or restaurant one day. But if guests somehow did not manage to find relief in the ample cocktail menu or Burnside’s fine guitar or simply the intricate tiling on the floor, there was indeed comfort in the clothes. Reid’s models gathered around a makeshift stage, donning single-button cashmere corduroy and felted wool blazers, high-waisted pleated and chalk-stripe trousers. Reid refines and updates workwear staples — boiled wool shirt jackets, henleys rendered in silk — until they no longer fit the utilitarian description, with soft shapes and a looseness to the silhouettes.

Right now, to think of anything other than the political firestorm engulfing the United States is next to impossible. Every few hours there is a new tweet, a new video, a new article unearthing yet another atrocity of the Trump administration, less than two weeks into its tenure. And yet, we must continue with our daily lives, feigning normalcy in between the protests. Whether or not he intended to do so, last night Reid made things a little easier. At least for a moment.