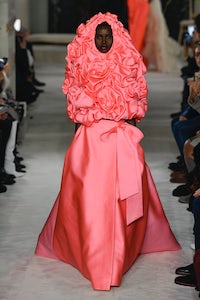 PARIS, France — Pierpaolo Piccioli showed another stupendously beautiful couture collection for Valentino on Wednesday night. He’s making a habit of it. The power of his presentations lies in their transcendent grandeur, in the way the extravagant volumes, the opulent colours and the enthralling artisanship overwhelm mere reason. And if reason attempts to prevail, it will be escorted to the door by shownotes that itemise the hours, the yardage, the weight of embellishment. In this show, Kaia Gerber’s gauze and organdy gown was laden with 6.3 kilograms of green sequins. The making of Natalia Vodianova’s sequin-embroidered bustier dress eventually consumed 690 hours of work. And one of the stunning finale’s most stunning looks required 97 metres of terracotta taffeta for the dress alone (The lilac taffeta cape that accompanied it took just a little less.)

Such numbers may seem Marie Antoinette-ish in their detachment from the reality that gets more mundane by the day for most of us. But couture is an art form, and, like other art forms, it has its own armoury to pierce the veil, to sense the great beyond. Cristobal Balenciaga sought God in a sleeve, in a tightly focused exercise of consummately refined human creativity. That's couture, in its most perfect nutshell. That’s why reason is powerless. There were people shedding tears – Celine Dion among them — at the end of Piccioli’s presentation.

The dresses were amazing, no doubt. Huge clouds of fabric, light as a feather. Piccioli said he didn’t believe in modernism in couture. “I believe in very classic couture, the celebration of beauty and dreams and emotions, volumes, technique.” He claimed he was paying homage to all of that, at the same time as he insisted he wasn’t looking back in any way. Still, one of the most striking things about the show was that it played the way you might imagine a show in the golden era would play, when Avedon and Penn would be waiting to photograph the looks as they came out of the couture ateliers: the dress composed of tiers of cocoa tulle “overlapped by silvered rose lace;" Liu Wen’s matching cape and dress, in organza and chiffon; Vittoria Cerretti, the black swan in amidst Piccioli’s floral angels.

And yet, as much as I folded in front of the spectacle, what I loved was the way Piccioli has perfected a sporty, off-the-shoulder slouch in couture. It’s where his wonderful colour sense was clearest, as in Alek Wek’s turquoise pants and gold coat, or the combination of lilac wrap and orange pants, or an ice pink coat over a chocolate blouse and emerald green trousers. Double-faced cashmere – Piccioli’s friend.

It was in these more "ordinary” items that I felt the subtext of this collection was clearest. A decade ago, Piccioli’s friend Franca Sozzani produced an issue of Vogue Italia that confronted fashion’s lack of diversity. She used only black models. This was years before words like diversity and inclusivity became lodestones for the fashion industry. “Fashion doesn’t remember people and what they do,” sighed Piccioli. “It celebrates new icons.” It was in Franca’s spirit that he wanted to address the casual racism that has made haute couture a rich white woman’s preserve for most of its history. But he also wanted to get it right, so he spoke to friends like Liya Kebede and Naomi Campbell, both of whom immediately expressed their support by asking to walk in the show. There were 48 black models from a cast of 65, one more thing which harked back to another era of couture, when the presentations of designers like Yves Saint Laurent and Emanuel Ungaro were so innately diverse in their castings that there was never need for comment. “To have a Roman brand represented by black beauty goes against all the xenophobia in Italy,” said Piccioli. Still, he resisted the implied political statement. “An aesthetic message by a designer goes deeper. Change the face and you change the perception of people more than any slogan.”

“Beauty is truth, truth beauty – that is all ye know on earth and all ye need to know.” John Keats wrote those words exactly two hundred years ago. And here's Piccioli to reassure us that the circle is unbroken.