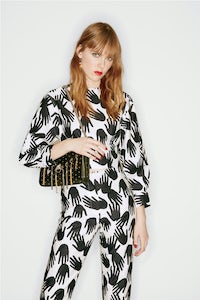 NEW YORK, United States — It’s not particularly easy to imbue grown-up clothes with a sense of fun. Julie de Libran, however, manages it well. Her vision for Sonia Rykiel is hardly juvenile, even though her Pre-Fall range did include not-so-serious versions of fashion’s favourite clichés. Yes, there was a trench coat, but it was cut with an open back in a lightweight tweed almost as fluid as a knit. Yes, there was a styled-up sweat-pant, but it was covered in sequins. Yes, there was a tweed skirt suit, but it was dotted with pompoms.

De Libran continued her previous seasons’ take on fashionable denim, offering a wide-cropped two-tone style, as well as high-waisted flares embroidered with playful patches. Those 1970s-era ideas are oft-covered territory, though. It was better when the designer dipped into the 1980s, pinning back a model’s hair with a velvet bow, offering a curved-cuff blazer in fluro-yellow and adding a scrunched-up ruffle to the collar of a shirt. The little touches were welcome, too: the tartan lining the back of a fur stole, the almost-surrealist hand brooches arranged on the shoulders of a jacket.

The best look, though, was a velvet sweatshirt and matching kick flares, both decorated with a rainbow of round gems. Worn with strappy sandals and a fur coat, it was luxurious and cool. De Libran said she had her client in mind when designing what she calls “twisted classics.” Since joining the company in May 2014, the designer has done a decent job of defining who that client is. In this case, it’s obviously a woman who wants to look French, whatever her province. Her next challenge will be to expand the base. The stripy unisex pieces hinted at the possibility of a full-fledged menswear collection down the line. 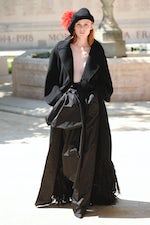 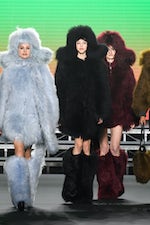