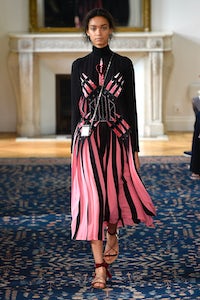 PARIS, France — In a preview the other day, Pierpaolo Piccioli quoted Nietzsche: there is a moment when you have to forget your past to build your future. That sounded like a radical prelude to his first solo collection for Valentino, now that former partner-in-design Maria Grazia Chiuri has moved over to Dior. Even more so when he said how much he loved the anarchy of punk. Then Piccioli mentioned he’d commissioned British fashion’s eccentric treasure Zandra Rhodes to interpret Hieronymus Bosch for Valentino. Huh? I said that fast five times and it still barely registered.

Except that it was actually the clearest expression of the freedom Piccioli felt to follow his own star with his solo debut. And, the more he talked, the more it became clear that his reference points were moments of transition, exactly where he found himself: Bosch bridged the Middle Ages and the Renaissance, punk also marked a definitive cultural shift. On Piccioli’s mood board, a 14th century painting by Giotto was juxtaposed with a Derek Ridger photograph from 1977. He felt that spontaneity connected them across the years. So where did Zandra Rhodes fit? Well, she was an apogée of the kind of individualism that feeds creativity whatever the century. Piccioli gave her a remarkable gift. He had her sketches translated into cloth in Venice on a still-operational loom that Leonardo himself built 500 years ago.

One more reference raised by that fascinating mood board was the Art Brut movement. “Maybe beauty needs to be more brutal,” Piccioli mused. Given that no fashion house has offered visions of beauty as pure and touching as Valentino in recent years, his musings coloured the anticipation of Piccioli’s debut with a slight anxiety. Never mind that there has been no other fashion moment in living memory where design partners split then simultaneously launched their next chapters. It was more the thought of that particular legacy being subjected to some kind of baby-and-bath-water upheaval.

So the biggest surprise with Piccioli’s takeover wasn’t how much he changed everything, but how much he was able to keep things the same, given his stated appetite for anarchy and studied forgetfulness. The elements of that were so subtle as to be undetectable. Like the tapestry trousers (woven in that same place in Venice) which Piccioli had abused – overdyed, raw-hemmed – because he wanted to create imperfection. They were shown with a white poplin shirt which opened in the back into a curious wimple effect. (Did Piccioli really say “erotic nuns”?) Rhodes’ prints were duplicated throughout the collection, one element – fish turning into swallows – again symbolising transitions. They looked artisanal, like ink drawings.

Anyone inclined (inevitably) to compare and contrast Chiuri’s effort for Dior with Piccioli’s for Valentino could let time decide: Chiuri’s felt airy and young, Piccioli’s had an adult, seasoned flavor. After saturating us in fuchsia and red, the house colour, he veered into muted, vintage tones, and embroideries that looked aged, like the jewellery. The sword that pierced a heart in one of Zandra’s motifs (a detail from Bosch’s “Musical Hell”) was duplicated in antiqued metal for earrings. Julia Nobis’s neckpiece was a collar of similarly barbaric provenance. “Fashion is storytelling,” said Piccioli.

If the story he told here was his own, it was remarkably in tune with the story that the house of Valentino has been telling since he and Chiuri boosted its fortunes so extravagantly. And that's surely a good thing.