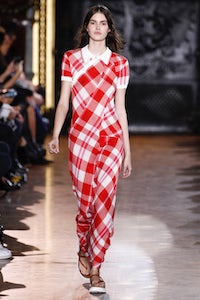 PARIS, France — Stella McCartney's invitation was a golden knuckleduster spelling out her name. That sent the clearest possible signal about the wallop packed by her new collection. She had powerful women on her mind — muses, the inspirations for artists, architects, writers and, of course, designers — though anyone expecting McCartney to name names would have been bitterly disappointed by her own muse. “Women are my muse,” she said nebulously.

But the Stella woman she presented in Monday ticked enough boxes to suggest that maybe McCartney wasn’t being so wishy-washy. There was sense and sensuality on this catwalk; decorum and dancehall. Colour, energy and movement defined the collection. It was best in asymmetric layers of bouncy pleated knits. Running a close second were bright checks and stripes, knitted into dangerous curves. McCartney has often played off the masculine/feminine thing (here, her Savile Row training took a turn with a double-breasted jacket, sleeveless, backless, and cut just long enough to function as a dress) but she’s never done it with quite as much brio as a bias-cut polo shirt paired with a long, second-skin tube skirt. In pink.

The curves were critical. Appliqued ribbons traced aboriginal swirls and spirals on sheer dresses. The final looks featured more sheer: eyelet embroidery, undulating down the torso, body-conscious in the extreme. If McCartney has always been a designer to celebrate a woman’s sensuality, there was also something more overt in Monday’s show. It guaranteed that the show was the designer’s best for a long time.

The recently deceased Cilla Black’s Anyone who Had a Heart played at the very end of the show — a poignant reminder that McCartney has a drop of the Mersey in her own veins. 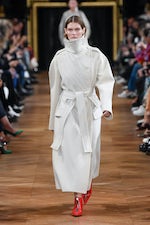 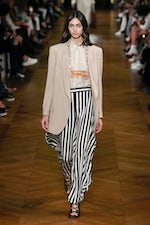 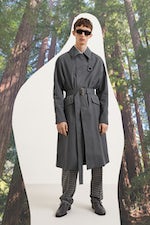 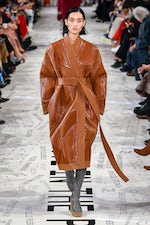