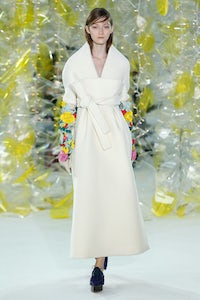 NEW YORK, United States — Perhaps it was the surrealist element, but there was something Lynchian in Josep Font’s Autumn/Winter collection for Delpozo. David Lynch’s greatest gift is his ability to bring a strangely inviting warmth to the macabre, not unlike the magnetic pull of the strangeness embedded in Font’s latest work.

Backstage after the show, the Catalan designer said that it is indeed a possibility that the director’s energy somehow seeped into his process; he’s a big fan. But his main references were Fritz Lang’s 1927 sci-fi epic Metropolis and contemporary artist Daria Petrilli’s digital illustrations, which have a visual depth which Font referenced through three-dimensional details. These included molded sleeves that curved just into the arm, pleats on a metallic wool skirt constructed to stand up straight off of the hips and stiff bustiers that framed the waist instead of hugging it.

Clusters of floral paillettes covered long leather gloves in the season’s kaleidoscopic palette, most notably marigold, rose, and royal purple. An oft-used dry wool crepe, which takes color so nicely, had the feeling of a traditional couture fabric, albeit lighter and thus easier to wear.

The twisted-couture details Font has become so well-known for were everywhere The designer cut out the shoulders of short puffed sleeves and sculpted a giant bow on the collar of an hourglass coat. The first look, however, was the most intriguing. Font constructed a panel on the front of a winter wool wrap coat that made it look like the model was wearing a strapless dress over her topper. But there was no wiggling in required, just closing a few snaps.

Font’s geometric details, mixed-media constructs and technicolor leanings made this one of the most Instagrammable shows of the season thus far. (Two runway installations of what looked like jumbo paillettes dangling from the ceiling didn’t hurt, either.) Indeed, it’s no surprise that the designer has become a favorite of more adventurous red-carpet dwellers like Cate Blanchett and Olivia Palermo, who is perhaps best known these days for her ability to move product. To be sure, Font’s customers, some of whom sat front row at today’s show, are mesmerized by his strange idea of beauty. This season, they won’t be disappointed. 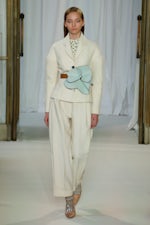 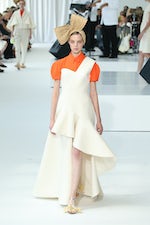 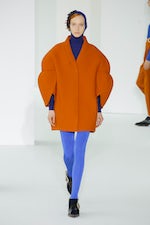 Deeper and Darker at Delpozo 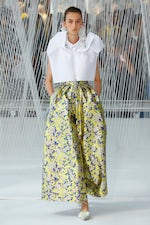