The sheer scale of the event‎ — and the fact that it marked Bottega Veneta's 50th anniversary and Tomas Maier's 15th year with the brand — couldn't help but cast his work in a more vivid light. 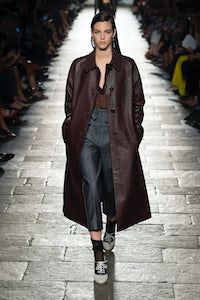 The sheer scale of the event‎ — and the fact that it marked Bottega Veneta's 50th anniversary and Tomas Maier's 15th year with the brand — couldn't help but cast his work in a more vivid light.

MILAN, Italy — Tomas Maier downplayed the changes at Bottega Veneta after his show on Saturday morning. The combining of Bottega Veneta's presentations for men and women? The venue change from characterless company HQ to the grand environs of the Accademia di Brera? Maier insisted they meant nothing special for the collection itself. "The men's and women's always start off together anyway."

Still, the sheer scale of the event‎ — and the fact that it marked Bottega Veneta's 50th anniversary and Maier's 15th year with the brand — couldn't help but cast his work in a more vivid light. If there has often been a cinematic flavour (usually film noir) in his work, you might think of this show as Bottega on a bigger screen. There was more of an East of Eden quality about the men (quiffs, chinos and saddle shoes). There was more of a chic, strong 1940's flair in the tailoring, more of that worn, washed-linen, faded-cotton dustbowl quality that is the clearest expression of Maier's faith in the character of clothes.

And there's never been a more graphic illustration of his conviction that Bottega Veneta knows no age than Gigi Hadid and Lauren Hutton strolling down the catwalk arm in arm, Hutton holding a remake of the Bottega Veneta clutch she first carried in American Gigolo nearly four decades ago.

This being an auspicious anniversary and all, Maier revisited other accessories from the label's past, but he quickly squashed any thought that the clothes might be a retrospective. They were, however, of a one with the spirit of things he has shown before. That film noir notion, for instance. High-waisted, deep-pleated skirts, slinky, cinched black knit dresses, shiny silk coats, also belted tight, were the stuff of a femme fatale’s wardrobe.

Her archetypal male counterpart could have been a handyman or a mechanic, putting on the dog for a big night out. (The postman always rings twice at the Maier house.) Then there were the shirt dresses, the 1950’s housewifely pieces in chintz linen, accessorised by dinky little purses, wedge heels and socks, the boys by this point in smart suits with a 1950’s tonic sheen.

The show unfolded like that, with complementary groups of womenswear and menswear telling little stories within the main narrative, which was, of course, how Tomas Maier turned a struggling accessories brand into one of the world’s leading purveyors of luxury.

And the fact that the answer to that question wasn’t blatantly obvious on the catwalk was, in fact, the answer. Subtle, thoughtful, with a spice of the odd and a feel for the sensual — it’s a recipe that whispers to the palette, rather than assaults it with strong flavours. As Maier himself said in the press-notes, “For me, it is always about simple and easy things that are special for those people who appreciate them.” Such things, such people, such appreciation... not really simple and easy at all.