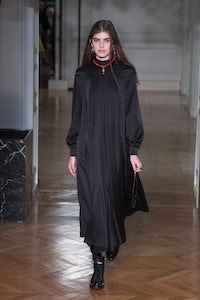 PARIS, France — Possible dialogues. What connoisseur of oddity hasn’t imagined sitting down two absolute opposites for a chat over a macchiato or a shot of Casamigos? The Marquis de Sade and Britney Spears? Elizabeth Taylor and Gandhi? Heaven!

Pierpaolo Piccioli attempted something similar with the collection he showed on Sunday afternoon. His mood board was all over Victoriana — mementoes like the hair of a loved one in a locket — and Memphis, the radical Italian design collective from the 1980s which pushed an uncompromising pop ethos for the masses. Except the masses didn’t buy/couldn’t afford it.

It might be the case that Piccioli has always been working the shadowland between fantasy and reality. His erstwhile partner Maria Grazia Chiuri went away to Dior, where she is mining a seam of social activism. Piccioli lingers in a world that represents princesses.

His show was like a fairytale, with its smocks and tunics and story-drenched layers. He’s recently been inspired by English eccentrics like Zandra Rhodes. Here, there was Thea Porter — maybe even Bill Gibb — in the floatiness of tiered chiffon.

But it was the fabric designs of Memphis linchpin Natalie Du Pasquier that informed Piccioli’s graphics. The numbers, the motif of hands counting, the serial florals, graphic… pop! This was Piccioli’s possible dialogue between the real and the imagined.

But he has one particular commitment — to unite strength and romance. That is so laudable that one feels like a right old churl to hold him to account for his flaws. Whatever else, his princesses had spines. And he also gave them souvenirs, their own memento mori, in the beautiful dresses they would wear for one moment that was gone all too soon.

Nature decided to reinforce that appropriately melancholic notion by lashing the Hotel Salomon de Rothschild with apocalyptic rain during the show. But the suffocating beauty of Piccioli's creations kept us safe and dry in our fashion bubble.