The designer rose to the challenge he set for himself, an excursion into colour, and brought a gratifying spark of excitement to his latest collection. 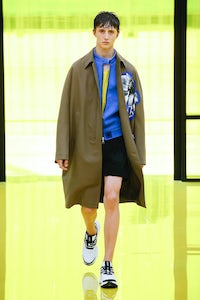 The designer rose to the challenge he set for himself, an excursion into colour, and brought a gratifying spark of excitement to his latest collection.

MILAN, Italy — When Neil Barrett said the goal of his new collection was “examining contemporary masculinity, " he sounded pretty much like he does after any of his shows. That examination is his life’s work as a designer, and if its slow, steady evolution occasionally allows a little sameness to creep in, that’s a small price to pay for a client base which has also evolved steadily. And besides, it also allows for moments of evolutionary leap, when there’s a gratifying spark of excitement in a Barrett collection. And so it was on Saturday afternoon when he embraced summertime.

His show space was illuminated with a yellow glow, not so much sunlight as an eerie Olafur Eliasson installation. It also illuminated one of the challenges Barrett set himself. “Making colour work,” he called it. He is the master of the military monotone, an achievement he reminded us of here with various khaki ensembles, alongside fabulous coats whose full-skirted silhouette recalled Hollywood’s frontline in the 1940s. But that just made his excursions into colour all the more striking, particularly with the sheer racer-backed tank dresses in vermilion and cyclamen which were perhaps the most overt (as in, un-tomboy-ish) womenswear Barrett has yet designed. He dressed his men in the same intense red, in a deep blue and in a yellow that took up acidic hints from the backdrop, and all of it spoke to his celebration of summer.

So did the shorts which, cued by Psychedelic Furs singing “Love My Way” on the soundtrack, evoked “Call Me By Your Name," now and forever one of the ultimate sensual summertime movies. Even when Barrett draped the bare legs in one of his long, military-inflected coats, he couldn’t cloak the hint of concupiscence. Utterly seductive.

To that heady stew, Barrett added florals. It is, after all, their time, in a Hawaiian style. Except he offered them in his own way, hard-edged, photo-realist, sliced and spliced, even appliqued on a Prince of Wales check. Slightly ominous, in fact, like a stain. It was reassuring to see Barrett rising to that particular challenge in such a way that he could reclaim the tropical trope with his own rigorous take on sun-drunkenness.