The rejuvenation at Hermès has been going on for quite a few seasons, but it only truly glued with this collection. 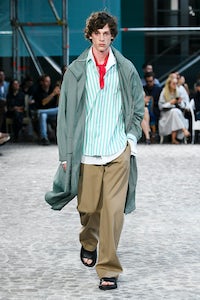 The rejuvenation at Hermès has been going on for quite a few seasons, but it only truly glued with this collection.

PARIS, France — In describing the Hermès man of the season, the show notes waxed lyrical: "His summery nonchalance flourishes in ample and generous volumes, which convey a sense of happy freedom.”

It sounded like a very poetic preamble to some kind of hyper-luxurious banality — lightness and color are de facto summery musts — but in fact, it was not. The rejuvenation at Hermès has been going on for quite a few seasons, but it only truly glued with this collection, which had a lightness and an exuberance rarely seen before at the house. It also made for one of Véronique Nichanian's most accomplished efforts.

The show was held en plein air — a Parisian must this season — in the same venue as last season: the Mobilier National warehouse. A jumble of random chairs from different eras functioned as seats but apart from that, the scene was brilliantly spare; such a relief in this moment of mega-productions.

The bare setup highlighted the bright colors and super-light volumes of the collection, which was strong as usual on outerwear, leather and accessories. The big parkas in light blue, the aqua anoraks, pink Bermudas shorts and sporty separates all gave an idea of the Hermès man as a lighthearted human being. Nichanian delivered the message with no fuss and no pomp: directly and pragmatically, with remarkable softness. The printed silk jackets in the finale added further nuance. Borderline tacky, hence irresistible.