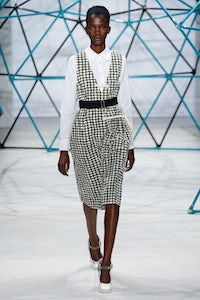 NEW YORK, United States — Buzz is a blessing and a curse. Suno had plenty of it a few years back and Max Osterweis and Erin Beatty have done a respectable job of not falling into a deep pattern of repetition or — just as damaging — steering too far off course.

For Spring 2016, the duo moved a bit away from their signature pop-y florals, favouring geometric shapes instead. A layered-square print, reminiscent of unevenly stacked Post-It notes, climbed diagonally up the front of a cotton dress, while stripes in varying widths were arranged like a puzzle on a shiny frock, four buttons decorating the wide inverted pleat that came down from the waist. The collection’s sense of purposefully random organisation — reflected via a tiny bow placed on a seersucker-plaid pinafore, or the asymmetrical hem of a pin-tucked denim skirt — was informed by a visit to the American Folk Art Museum’s recent exhibition, “When the Curtain Never Comes Down: Performance Art and the Alter Ego.” It featured the work of many self-taught artists. “Many of these people were kind of dealing with mania and, in order to sooth that, they created art,” Beatty said backstage before the show. “Lots of what we created was about the way we order things in our mind.”

The collection’s best looks were pulled together with tonally stitched cotton belts, which added structure to the many dresses and a powerful confidence to twill jackets. The duo introduced a new a category, too: Italian-made shoes, which had a chunky, quirky quality to them. “I felt like there was room in the market for something that didn’t feel so sexy, or so precious,” Beatty said. The thick-strap sandals in particular were cool, if not game changing.

To be sure, there was a lot to like. But to love? A cohesive collection does not equal a magical one and this effort lacked the zip — the joy — that makes Suno such a palatable label. Practical hanger appeal is one thing, but Osterweis and Beatty could push themselves further creatively. There were no surprises here. 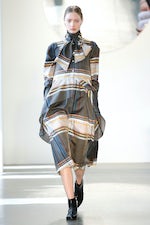