In their debut runway outing, the designer duo bridged fashion and art, playing with the super-banal, but it is their scarcity-driven sales strategy that could be the label's real wildcard. 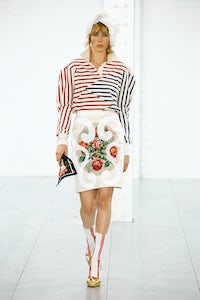 In their debut runway outing, the designer duo bridged fashion and art, playing with the super-banal, but it is their scarcity-driven sales strategy that could be the label's real wildcard.

Theatrics aside, it’s their sales strategy that is the real wildcard here: Symonds Pearmain are not pining to hang in Dover Street Market and Barney’s, instead their clothes are purposefully rare, available not in fashion boutiques but upon enquiry to Bortolozzi in Berlin and Cabinet Gallery in London’s Vauxhall. “There is a conceptual thread, which is about trying to examine how value is attached to fashion and art,” said Symonds. “The only point it becomes interesting is the economic correlation of those two forms.”

Entitled "Matchy Unmatchy," their third offering was prefaced by a provocative work of fiction à la Clockwork Orange written by the artist Ed Atkins, alongside the sole tagline of "Elitist Propaganda, Draggy Gestures, and Tribal Simulacra."

As for the clothes themselves, they played with “a hinterland of clichés and the idea of things matching your expectations. I’m interested in the super-banal,” said Symonds. And match they did, in the sense of corduroy twin-sets, spliced rugby jerseys worn with capri track pants, thick striped snap stud denim, and baroque curls of patent leather or needlepoint roses that upped the bourgeois quotient.

Countering that, tour t-shirt turban styling and hip-hop screen prints ("Worlds Famous Supreme Team" on the bum) conjured a polished Buffalo attitude. These clothes will also be available upon enquiry, however the designers will only produce a handful of styles though in wider editions of 10, 50 or 100 pieces. “I don’t want to make masses of clothing,” said Symonds. “And it’s not about the clothes being inaccessible or unwearable. This is about elevating the practice of fashion and changing the economic context of the activity.” All power to them — as far as the fashion and art worlds’ torrid love affair goes, this is as cult as it gets.