Van Assche showed a reflection on what he considers to be the DNA of Dior menswear, but his signature hybrid of sport and tailoring will always err on the side of the latter. 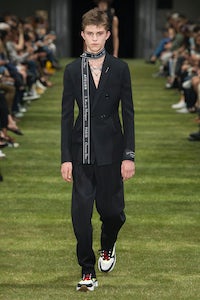 Van Assche showed a reflection on what he considers to be the DNA of Dior menswear, but his signature hybrid of sport and tailoring will always err on the side of the latter.

PARIS, France — The power of smell is such that when the first astronauts went into space, they carried vials of different scents as reassuring reminders of Planet Earth. The one that spoke most to happy memories was apparently fresh grass. It certainly worked that way for Kris Van Assche, whose latest show for Dior Homme, Late Night Summer was primed with his recollections of adolescence and staged on a carpet of grass that smelled almost overpoweringly summery.

The massive curtains of dark tape that hung above it might have been an abstract rendition of a night sky, but I thought of cassette tape too, and teenage boys like Assche slaving over compilations for their Walkmans. Frederic Sanchez struck all the right notes with his soundtrack: Radiohead’s Creep, Depeche’s Enjoy the Silence, REM’s Losing My Religion, Black’s Wonderful Life… more happy memories.

There was a sweatshirt in the show embroidered with a painting of flowers by the artist Francois Bard, whose pictures of boys in hoodies Van Assche also duplicated. Bard used some words in his original work, which the designer loosely translated as, “Time is only catching those who ignore it.” Van Assche has never been in any danger of that. He’s always been acutely aware of the passage of time, even more so this season as he celebrates his 10th year at Dior, which is also the house’s 70th anniversary.

The first half of the show was Van Assche’s reflection on what he considers to be the DNA of Dior menswear, a black suit and white shirt. His dissection was thorough, from an opening look where, for the first time, he offered a male take on the classic “veste de bar”, very tailored with a suppressed waist. Next, the jacket was sleeveless, paired with short shorts, gym shorts really, except they were in black ottoman wool. A little later, there was a tailcoat, Van Assche’s favourite piece in the collection, “because it was the most challenging.” It was cut on the bias, a break with tradition that gave the atelier’s tailors nightmares, according to the designer. Its formality was defused by being shown inside out and paired, again, with those shorts. And, again, it was also shown sleeveless. The orphaned sleeves were used in the collection as scarves or casually knotted round waists.

If that first half of the show was a celebration of his professional life — the address of the atelier was used as a decorative ribbon detail down a sleeve or writ small as a pinstripe — the second half was personal. “Late night summer, when we were kids staying out all night for the first time, drinking beers, falling in love…” Van Assche based these looks on school uniforms, with sweatshirts and bombers printed with a college-like logo, or those Bard images of hoodies.

He mentioned the “attitude of the street” often. Every model wore trainers. Some also wore necklaces that were supposed to look like they’d strung them themselves, from dice and skulls and shells. And there were so many more of the shorts that the teenage gam is incontrovertibly confirmed as the primary male erogenous zone of Spring 2018.

But (and there is always a “but” with KVA) something else Van Assche said illuminated why his signature hybrid of sport and tailoring will always err on the side of the latter, so that even the raging hormones of adolescence were subsumed here by adult abstemiousness. I asked about his own summer late nights, his own bittersweet memories of adolescent firsts. “I was way too good,” he answered ruefully. “That’s why I have to live it now.” So it's all a fantasy. But, after a certain point, time will catch you, and it’s just too late.