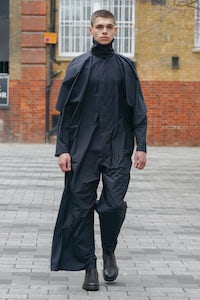 LONDON, United Kingdom — “After 25 years, you have a style,” said Hussein Chalayan after his men’s presentation on Sunday morning. It was his own humble acknowledgment of one of the most distinctive signatures in fashion, one which surely deserves more attention. Chalayan does his best to remind us. For instance, one of the dominant design elements in this collection was the frame he created for the body with an exaggerated seam of fabric running down sleeves and pant legs. He said he’s been doing it since his epochal Chador collection in 1998. Another Chalayan signature on display here was his longtime fascination with hybrids, obvious in a coat/jumpsuit combination or a camel cape/coat.

He said his fascination stemmed from his experience of life in a culture other than his own (a hybrid himself, the young Turk growing up in London). That was the launchpad for Chalayan’s new collection: the notion of how your environment shapes you translated into cultures with radically different realities. He focused on the Aborigines with their songlines, the Dreaming Tracks with which they sing their world into existence, and Asian nature rituals based on agriculture, seasons, weather systems. Chalayan has always been fearless in the face of such abstractions. And if he hadn’t talked about his inspirations, you’d scarcely have guessed from the clothes themselves. Yes, maybe something of Japanese farmers’ and fishermen’s workwear in the dark functional sobriety of the folded, draped clothes (echoes of Yohji). And the topstitching on the collection’s black and white graphic suggested topographical mapping. “Urban mapping layered with Aboriginal songlines,” is how Chalayan described it.

But ultimately, it was Chalayan’s own aesthetic that came through loud and clear. A pair of deep-pleated trousers paired with a strong-shouldered jacket and T-shirt (launching his collab with Chinese furniture maker Boloni) made for a casually elegant look, structured but soft. It’s been a while since I thought of Gattaca, the movie that was a definitive menswear influence a couple of decades ago, but it was a pleasure to be reminded of it: something of the past infused with an indefinable essence of the future. Reality repunctuated, in Chalayan's own words.