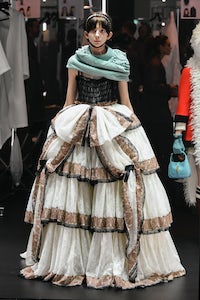 MILAN, Italy — Alessandro Michele’s love of the fashion show knows no bounds. Everything he wrote or said about his Gucci presentation on Wednesday suggested that he considered it his idea of childbirth: “unrepeatable ritual”, “precious delivery”, “blessed passage”. He even compared the show’s extraordinary staging to “the mother’s womb where poetry blooms”. Michele obviously has no problems with hyperbole.

But he was right in a way. He put the mechanics of fashion on display. In the post-show press conference, Michele referred to himself as an “unsuccessful director”. On his soundtrack, there was a voiceover by the maestro Federico Fellini, a kindred spirit speaking to the designer across the decades. Fellini compared moviemaking to setting up a circus, with the director as ringmaster. Michele clearly identified. His models were dressed and presented on a huge revolving stage, cocooned on a carousel, which rotated to the relentless pulse of Ravel’s “bolero”.

As the music reached its climax, the models emerged from their cocoon and paraded around the circular runway, while their dressers assumed their positions on the carousel, elevating the backstage mechanics we never think about to centre stage. “We were your show, you were our show,” said Michele. It was exquisite, and for all you keyboard warriors who are pointing out that Isaac Mizrahi did it first (26 years ago, seeing you asked), Alessandro delivered his take with a conceptual grandeur that radiated a peculiar soulfulness.

In his men’s show a month ago, his stage was dominated by an ominous, relentless pendulum. Here, there was a neon metronome measuring out the seconds. The man has time on his mind. Too much? Too little? What was clear is that he had once again dived into childhood as an inspiration. Post-show, he rhapsodized about the proportions of children’s clothing, and the perfect world “where you can play with things you can’t use anymore when you grow up.” A loss-of-innocence scenario, in other words.

Michele literalised that notion most blatantly in outfits that slung a leather bondage harness over a grey school uniform, a red windowpane check suit from tween Princess Anne’s closet, and the puff-sleeved pretty that Gretel left in her dressing room the last time she sang with the Von Trapps, which scaled new heights of oddness for a designer who has fearlessly poked the bear of bizarre at Gucci. The same awkward combination of (relative) innocence and (almost) worldliness underpinned the whole show.

Fashion is Michele’s church. He decked models with crosses. “A symbol of longing, of loyalty,” he called them. He showed looks that were literally puritanical, which gelled with his post-show definition of a fashion show as “ a sacred, religious ritual”. But then he casually bared the breasts of some of his models. And his fascination with the decadent olden days of Hollywood was never far away in those floor-sweeping dresses. (Would he have used Norma Desmond in an ad campaign?)

The dichotomy left a lingering sense that Michele might actually be a little bored with the ritual at this point. He did admit he’s exhausted by its endless repetition, season after season. He compared himself to a physicist, seeking a theorem. “And one day I want to stop and do something else.” A friend had told him the cut-off was 45. “I’m 48 and I haven’t found anything else.” So he lingers lovingly, celebrating his metier, subverting it.

His show notes, always a window into his most wayward thoughts, were this time handwritten on lined paper, like a junior school essay. They offered this aperçu: “May that wild and crazy hive that I made my home have a throne.” I guess Alessandro Michele can add kingmaker to his resumé.