The show was full of great product just asking to be worn right off the runway, but Luke and Lucie Meier’s monastic take on the minimalist brand could use a shot of personality. 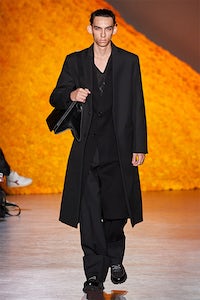 The show was full of great product just asking to be worn right off the runway, but Luke and Lucie Meier’s monastic take on the minimalist brand could use a shot of personality.

MILAN, Italy — There is something monastic to the spareness and rigour of Jil Sander. The trait has always been integral to the brand, but Luke and Lucie Meier, who took the creative helm almost three years ago, dialled this up, not least because the couple favour the kind of bold volumes that recall monks.

What better place, then, to stage a show than the refectory of a convent? Better still if the convent is laden with history and next to one of the oldest and chicest pharmacies in the world. Remember, monks were making cosmetic potions and scents way before the birth of the beauty industry.

Thus Jil Sander opened the Italian menswear season in Florence with a special show held in the cloisters of the Santa Maria Novella church. Pitti works wonders when it comes to venues. The place was spare, corners filled with stacks of marigolds. The clothes were spare, too, touched by the crafty elements the Meiers favour, and which they keep exploring season after season.

This season there were shiny silk collars, dangling silk tassels, fuzzy knit textures and handmade silver studs that occasionally doubled as broaches. There was a zing too many straps and tabards à la Loewe. But that was a minor misstep.

In a fashion that’s increasingly fast, shallow and clogged with Instagram-friendly maximalism, Jil Sander is a slow brand offering the kind of detoxifying minimalism that can feel like a relief. It also makes for great product just asking to be worn right off the runway. The big coats and deep-cuffed trousers were gorgeous.

That said, the overall effect was a little emotionless. It’s the curse and the blessing of minimalism: one millimetre makes all the difference, and a piece can speak volumes or remain completely silent. But ultimately what’s still missing at Jil Sander is a little more daring; something as vocal and full of personality as the smell that makes the Santa Maria Novella potpourris so astounding and different from the rest.