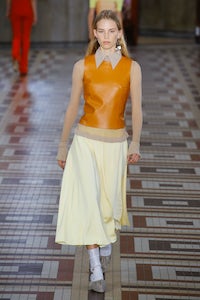 PARIS, France — “Fashion is a product,” Jonny Johansson declared, a little wearily, after his spring show for Acne Studios. Which is why he was drawn, by way of contrast, to the life of a dancer — the spontaneity, the movement, the passion — as inspiration for his new collection. Following dancers on Instagram, he’d become obsessed with the details of their lives. He translated that voyeurism into a performance in four acts: rehearsal, onstage, offstage and night.

The lines of demarcation between the four weren’t particularly strict. The overarching theme of the collection was the body in movement, its keynotes light layering and the interplay between strict definition and fluidity, embodied in the first look, a leather vest over a sheer jersey blouse paired with a full skirt that flowed to mid-calf.

Tanks, scooped necks and bodysuits conveyed the athleticism of dance, loose, blouse-y smocks and slouchy linen dresses had some of its romance. Johansson printed visual triggers throughout the collection: posters of legendary choreographer Merce Cunningham’s company and photos of his dancers, NYC Ballet and Ballets Russes posters, all of them the cutting edge of dance. So this wasn’t tutu formal. And, even when Johansson took on “Swan Lake”, he turned it into a mannish, jacquarded pant suit, or a crystallised swan motif lavished over the lapels of an oversized tuxedo.

Decades ago, Issey Miyake’s collaborations with choreographer William Forsythe were the most glorious fusion of fashion and dance. Johansson deliberately incorporated Issey’s plissé signature into his own designs. It was one more measure of his collection’s most appealing characteristic – thoughtfulness infused with sensuality.