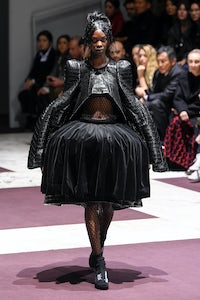 PARIS, France —  Rei Kawakubo engaged with the world last season in a new way, not only issuing a clarification of her process — “what’s deep inside” — but also introducing a literally readable element in the form of a print of what seemed like newspaper coverage of a war.

The engagement intensified and darkened this season, almost as if, in reflecting on the world, Kawakubo had found it so sorely wanting that she was plunged into a slough of despond. She would scarcely be alone in harbouring such thoughts with the current state of global affairs, the idiocy of men rampant in the Trump-Brexit-Bolsonaro assault on decency and common sense, the clouds of climate change lowering over all. The clock is ticking. The end is nigh.

Her models looked like birds plucked from an oil spill, beauty draped in a Stygian slick. The sheen was also reminiscent of reptile scales and insect wings, the luxuriant silhouettes of the natural world. Luxury may have been something Kawakubo had in mind with her collection. She drew on a repertoire of the most civilised dress: ruffles, panniers, peplums, bustiers, a pouf, a puffball, a big, bowed cape, a pagoda shoulder… and the most papal of purples. But she mutated such finery with hard industrial elements: vinyl, pleather, black rubber, grommeting, buckles, latches and knobs, like ornate jewelled embellishment. The impact of this dystopian couture was stunning. Society through a glass darkly.

Kawakubo called her collection “The Gathering of Shadows.” “Many small shadows come together to make one powerful thing,” she offered by way of explanation. But shadows are sinister, and she toyed with fear. There was something gladiatorial about the staging, the way the audience was tightly stacked around a square. Lights hovered over this space, extended arms moving like the aliens in “War of the Worlds.” Some models walked with faces obscured by hoods. Semana Santa, or vigilante. The digital fascism of social media allows no ambiguity. Another way station on the road that winds to The End.

The soundtrack was provided by DJ Parma Ham, who was last seen supporting his friend Salvia when she designed the body modifications for Rick Owens’ show on Thursday. They are kids with an uncompromising, mordant vision. For Kawakubo, Parma Ham offered the angelic voices of a children’s choir singing “All Things Bright and Beautiful,” their performance brutally truncated by the sound of an explosion. After that, a moment of silence.

But then the models convened on stage in a circle, bodies facing inwards, faces gazing upwards, turned towards the One Power. The closed circle was a consummately hermetic image, but at the same time, it suggested a coven, a ring of female power. Hope.