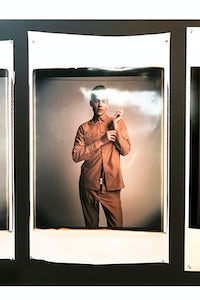 NEW YORK, United States — Rag & Bone’s chief executive and designer Marcus Wainwright has all-but-declared the fashion show dead. This season, instead of trotting out his latest men’s and women’s collections onto a runway, he asked 70 friends of the brand to pose in Rag & Bone for a series of Polaroids and portraits shot by collaborators Glen Luchford and Frank Lebon.

Nearly all of those subjects showed up in their looks for a party on Thursday night at a space right around the corner from the brand’s meatpacking district headquarters. The 15th anniversary exhibition, which also features blow ups of campaigns and visual projects from over the years, will be open to the public for a couple of days. But tonight, Radiohead’s Thom Yorke was DJing in his black suit, Mikhail Baryshnikov was sidling up to the bar, and “The Americans” star Matthew Rhys was dutifully posing next to his portrait.

“I don’t really see it as a collection,” Wainwright said, one of his three children standing by, wearing a checked coat with its red-velvet collar turned up, as well-wishers streamed in. “For some reason, in my head, the idea of a fashion show collection isn’t really relevant to me.”

Instead, the lineup underscored Wainwright’s commitment, more pronounced over the past few seasons, to simply deliver things that are good-looking and unfussy, like a real-camel wool Chesterfield-style coat (worn by CFDA chief executive Steven Kolb and inspired by Wainwright’s grandfather), a Linton tweed jacket (spotted on Rhys’ partner and costar Keri Russell) and an exaggerated crosshatch-weave skirt suit (modelled by the artist Tali Lennox). Back at the showroom, other bits — indigo-dyed corduroys for men, a jersey-sleeve hooded stadium coat for women — also made good on his promise.