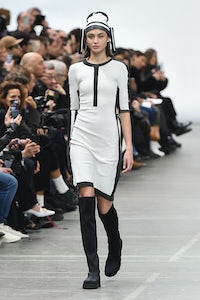 PARIS, France — I’ve missed Issey Miyake. Not only the man himself, who stepped back from designing over 20 years ago, but I’ve also not seen the last few seasons of collections from his acolytes, who have done a remarkable job of sustaining and enlarging on his legacy. More fool me. The current standard-bearer is Satoshi Kondo who called his show “Making Speaking, Speaking Making,” a Japanese twist on onomatopoeia, defined as a word which makes the sound of the thing described. Like water splashes or wind whooshes, which is what it was doing on the soundtrack when we took our seats in the Lycée Carnot.

Kondo’s words were things like konekone for mixing clays and goshigoshi for smudging them, or kukkiri for drawing lines on paper. All of these and many more were techniques, probably very traditional ones, that he used to shape his clothes. Issey Miyake has always been the most tactile brand. For Issey and his successors, the goal has been a humanist celebration of the senses, an inspiration for shared feelings that connect beyond languages and cultures. And, as we read in the haiku-like show notes, its essence is making things with hands.

So we had a Miyake show that was the typically flawless blend of craft, clothing and performance, directed by Daniel Ezralow, the latest choreographer to flay his fabulous mark on this Autumn/Winter season (after Michele Rizzo at Marni men’s, Damien Jalet’s thrilling staging of Jun Takahashi’s Undercover collection and Karole Armitage’s dance fury at Marc Jacobs).

Miyake’s clothes have always worked best in movement, in tandem with the body. Here, Kondo opened with outfits that looked like they could quite literally have been thickly outlined on, then scissored from the white backdrop, drawings come to life in the seamless flat-cutting that is a brand signature. Such radical trompe l’oeil effects are a staple of a Miyake production, but they are always founded in human ingenuity, like the dresses composed of a patchwork of different textures and colours that had actually been woven as one piece.

The collection ran a typical gamut, from ethereal nylon windcoats (conveying gently falling snow) to Michelin-man quilting in feather-light articulated pieces (23rd-century samurai) to a gorgeous nomadic sequence which used a traditional mud-dyeing technique (for which there was surely an extremely physical word). The finale was a train of men and women united by one continuous knit, “connected beyond languages and cultures.” As messages go, it could scarcely be more timely – nor could the visual have been more poignant. As a boy, Issey-san witnessed the destruction of Hiroshima. Having seen the worst man can do, he built a business which celebrated the best. It endures.