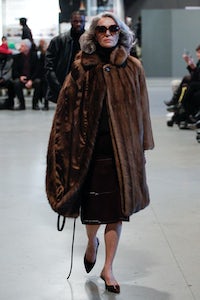 PARIS, France — When Demna Gvasalia said his favourite subject was sociology, you just knew it must have been sheer joy for him to research his new Vetements collection. He called it Stereotypes, and sent 36 of them down his catwalk: from punk to pensioner, football hooligan to homeless man, rich bitch to bride.

Gvasalia used Exactitudes, a longterm photographic project in the Netherlands, as his basic text. For 15 years, Ari Versluis and Ellie Uyttenbroek have been making “a photographic argument against uniqueness,” by cataloguing the binding similarities in particular social groups that ultimately render all of us un-special — because in the end, we all belong to something. It’s a perfect anthropological foundation for Vetements, the fashion label that began by insisting it was nothing more than clothing. That humble claim has been overwhelmed by Vetements’ huge, rapid influence, the kind that suggests the fashion world was waiting for just such a thing. Gvasalia has taken it places it had forgotten how to reach, this latest show being a case in point.

The very idea of “stereotypes” has a negative caste. If you can be stereotyped, you can be controlled, dismissed even. But Tuesday’s show was held in the Centre Pompidou, a huge temple to international creative endeavour. And the invitations were forms of identification from all over the world. I had the Carta D’Identita of a 50-year-old self-employed professional from Florence, Italy. A neighbour had the driving licence of a blonde Californian woman. Imagine that x 300, a microcosm of the global village, powerful in its variety, extraordinary in its ordinariness. Take that, Mr Drumpf.

Inevitably, Gvasalia’s presentation seemed more like a statement about diversity and identity than a fashion statement for Autumn/Winter 2017. Every single look was broken down in accompanying notes. “COUCH POTATO: Padded bathrobe coat worn over a woolen cardigan, stretched out white t-shirt and woolen pyjama pants.” That was the one Demna identified most with. There were others he had to look up, like “EMO: Fitted zip-up hoodie worn on top of black skinny jeans. Accessorised with a studded leather belt and striped tights.”

It felt like realness, compared to the “realness” of the Balenciaga collection he showed the other day. So will your favourite online retailer be carrying such items, along with the hundreds of others that dressed the Vetements stereotypes? Well, some of them will emerge, because camouflaged amidst the banalities of everyday dress was an actual collection that will advance the Vetements business with its alchemical transformations of sports and outerwear. And it might even take it onto the red carpet if “NOMINEE: Electric blue evening dress worn with matching shoes and an embroidered clutch bag,” catches an adventurous vedette’s eye.