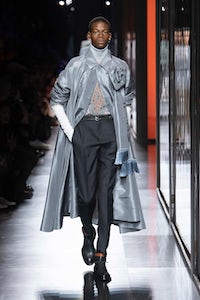 PARIS, France — There was a rainbow over the Place de la Concorde before the Dior men’s show on Friday. A blessing from Judy Blame? It was a lovely thought, quite in keeping with the impact he had on people. Blame’s been dead two years but he’s never been more present in fashion. And Kim Jones’s collection was an extraordinarily loving, living tribute to the stylist who was at the heart of London’s creative whirlwind for more than three decades.

They were working on a book when Judy died. He made Jones promise he’d finish it in his memory. I think he did better than that by reviving him in a collection for Dior. “Judy loved couture,” said Jones. “He loved beautifully made clothes.” That’s what we got on Friday. Jones has always been a demon for detail. His vision has occasionally outpaced the capabilities of his makers. But the Dior ateliers have indulged him. The make was at a couture level. If I could pick just two things (because they appealed to my perversity): the buttons were covered, and some trouser hems ended in a band of matte black satin. So small but so irresistible.

The thing that stood out most for me was that the new collection was essentially Jones untrammelled. His time at Dior has been marked by collabs: Kaws, Raymond Pettibon, Daniel Arsham and, most recently, Shawn Stussy. They’ve engendered acres of media coverage, and surely generated massive sales. But there were those among us who were wishing Jones would come home, where his passions were his passions. As ludicrously deluxe as his new Dior collection was, it had that authentic something he’s talked about for years: engaging with Judy Blame as a bottomless ocean of iconoclastic inspiration.

OK, enough with the iconoclasm. Jones’s ethos is the consummate marriage of creativity and commerce. He knows how to make beautiful things. He knows how to sell them. There was coat after jacket after pants in this collection that combined exquisite tailoring with tiny, seductive detail. But Jones also rented Judy’s archives from the trust that has been set up to perpetuate his legacy, so he was able to weave Blame into the story. Dior’s toile de jouy met Blame’s toile de Judy. Talismanic jewellery matched Judy coins to Dior padlocks. Blame loved zippers.

One of the collection’s cleverest pieces bifurcated a bomber jacket front and back with a zip. If you bought two in different colours, you would, therefore, end up with four jackets. (Please don’t make me get my abacus. My head for numbers is a howling void.) Blame also loved gloves. Every look was accessorised with them. There were berets too (designed by Stephen Jones) because Blame’s pioneering work included his styling of the masc/military Buffalo collective of creatives that the late Ray Petri put together in the early 80s.

It’s hardly the first time Jones has built a collection on his own ardent attachment to British fashion’s past. The Christopher Nemeth collection he designed for Louis Vuitton is an obvious forerunner. What was different here was the complete integration of London arcana and Parisian fancypants. One revelation of the massive Dior exhibition that crossed from Paris to London in 2019 was the creative directorship of Marc Bohan, who took over from Yves Saint Laurent in 1960 and ran the studio until Gianfranco Ferre was hired in 1989. Jones called Bohan his new obsession. That’s where the paisley embroidered knits in the collection came from. And a Bohan couture dress was the inspiration for the last look, a coat with encrusted sequins falling away from the shoulders.

I was partial to the look before that as well: a plain shirt embroidered with the DIOR logo and a safety pin. Judy Blame was a great proponent of DIY punk. His styling was so influential because he proved it was possible to make something out of anything. But that’s not really the way the fashion industry works. It is, after all, posited on growth and bottom lines. And then, every so often, a designer is posted to a heritage house with the wishful thinking that they might come up with a solution to stagnation. Most of the time, it's crickets. But you could hear the cogs fall into place with Tom at Gucci, Nicolas at Balenciaga, even Raf at Jil Sander. And on Friday, with Kim Jones at Dior, the click was deafening. It’s happening, Kim. The future is now.