The designer originally rode in on clouds of tulle. Could a look so frothy doom its creator to a carousel of kawaii? Not according to this latest outing. 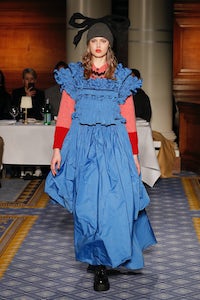 The designer originally rode in on clouds of tulle. Could a look so frothy doom its creator to a carousel of kawaii? Not according to this latest outing.

LONDON, United Kingdom — In lieu of show notes, Molly Goddard sent out a single photo of herself walking with her dad on Portobello Road 25 years ago. She came across it in “Fruits”, a much-loved Japanese bible of street style, and it kicked off a collection which meditated on things she loved about her childhood. She always wanted to get dressed up for her trips to Portobello and Kensington Market because everyone looked so interesting, her parents included, though she considered their style strange. It’s only recently that Goddard has begun to appreciate it. They weren’t exactly punks, but the stripe-y mohairs and brothel creepers to which Goddard père et mère were partial crept into their daughter’s collection on Saturday.

That was a good thing. Goddard originally rode in on clouds of tulle, sealed for posterity in “Killing Eve”. Could a look so light and frothy paradoxically turn millstone, dooming its creator to a carousel of kawaii? Not if you checked Molly’s latest outing, which once again paraded tutu-like tiers, along with the dramatic swags of taffeta that guarantee a Goddard girl is going to claim her space, but paired them this time with fairisle sweaters, those mohair knits and brothel creepers and even weightier Frankenstein platforms. She also layered the tulle over tailored plaid pants, flashing back to mid-90s Molly, little tiered skirt worn with trousers (and a sweater pledging her allegiance to BMX).

The plaid was attached to Goddard’s first venture into menswear, bowing to pressure from her beau. The combination of skinny plaid suits and fairisle cardigans had the vintage flavour of men’s clothes she might remember from stalls under the Westway on those early trips to Portobello.

But there’s clearly a business head atop that tulle-trimmed heart. Goddard said she was anticipating the difference the new head of product she just hired will make to her brand. Menswear is just the start. “Hopefully I can make anything I want to make from now on.” That can only be for the best — woman cannot live by tulle alone. In fact, the stand-out in this show was a black princess coat, tied with a decorous ribbon. Like opening a present at Christmas and finding a sinister, glistening chunk of obsidian when you were expecting another predictably shiny bauble. Surprisingly refreshing.