For all the grandiosity of the setting and the difficulties of realising such a production under strict pandemic restrictions, it felt surprisingly breezy for Browne. 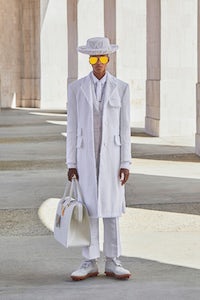 For all the grandiosity of the setting and the difficulties of realising such a production under strict pandemic restrictions, it felt surprisingly breezy for Browne.

Turns out that the Moses Sumney short Thom Browne showed for his most recent menswear in July was just the appetiser for the spectacle that accompanied the digital launch of his Spring 2021 collection on Sunday afternoon. Standing proud on his pedestal, sculpted by light, Sumney, clad only in a white sequined wrap, sang his arrangement of the Olympic Hymn. It was minimal, but monumental.

On Sunday, we got the opposite: monumental, but minimal. The L.A. Coliseum, home to the 1932 Olympics, was the setting, though in Browne’s droll scenario, it had been relocated to the Moon for the 2132 Lunar Games. With an intergalactic audience CGI-ed into their seats and a guest appearance by his dog Hector, in the form of an airship, Browne’s models, some real Olympians among them, moved glacially down the steps of the stadium, while comedian Jordan Firstman, Vogue-ordained Funniest Man on the Internet (and if not that, at least the Hairiest), provided a winningly self-deprecating commentary. Co-directing with Carissa Gallo, Browne claimed the project was essentially an extension on what he’s been doing with his live shows for years. “But it was nice to show the collection off in another medium.”

For all the grandiosity of the setting and the difficulties of realising such a production under strict pandemic restrictions, it felt surprisingly breezy for Browne. That’s what I mean by monumental yet minimal. His live shows are ritualised pageants that feed off accumulations of detail so obsessive you sometimes reach the point where you feel you can’t take another second. This one coasted along on sunshine and blue skies and palm trees and an all-white collection that was, by Browne’s admission, “rigorous in its simplicity”. He claimed that was a challenge he loved. I thought I saw more texture in the clothes too: all those complex intarsias and embroideries, the rugby stripes stitched on a blazer one by one, (the notes told me each stripe was a lane embroidered with its own tiny swimmer); the strips of wool seersucker handstitched into coats…I wouldn’t say “raw” but it made an agreeable contrast to Browne’s customary immaculate precision.

Mention 1930s, Olympic Games, and movies in the same breath and you’ll likely come up with “Olympia”, Leni Riefenstahl’s film of the ’36 Olympics, simultaneously body-beautiful classic and pernicious Nazi propaganda. Nowhere close, said Thom. He started a decade earlier, with French tennis champion Suzanne Lenglen and the Paris Olympics in 1924. The elongated silhouette, the dropped proportions, the purity of the colour palette — that’s where it started for him. There was something almost Gatsby-esque about the mood. The knit boaters by Stephen Jones compounded it.

But then Browne projected this Olympics-as-ideal notion far into the 22nd century, where he imagined it taking on a Utopian significance. “Especially after everything we’ve been going through in the last six months, there was a lot of hope in setting this story in the future, where everyone will be equal and accepting.” The gender lines were blurred almost out of existence. Men wore dresses, women wore pants, everyone wore pearl studs. “For the last couple of seasons, I’ve been making that connection,” Browne said. “It’s beautiful to show there isn’t that much of a difference.” Togetherness also makes a very deliberate stand against the divisions that currently constitute a different kind of plague in society.

Browne claimed that, under lockdown, he grew more attached “to food and to champagne”. He made an animated film using the stick figures that he sketched for the collection (they’re embroidered on the clothes). And he also used the time to reflect on what he loves about his work, and where that will fit in the recalibrated time to come. “I think people are hungry for interesting, creative ideas and I feel that’s my challenge…be more creative than I’ve been in the past.” But first, Thom has to get back to Earth.