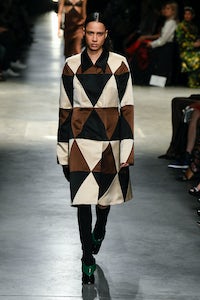 LONDON, United Kingdom — MORE JOY, Christopher Kane’s way back to the sunny highlands of ringing tills, seems, on the evidence of his latest collection at least, to have freed him to cross back to that dark side he relishes: the seedy sex, the cultish obsessions, the strange things that people do in the name of satisfying their desires. And can we please thank Satan for that!

His new offering was Kane unleashed. And to think, it started so well, with Adam and Eve in the Garden of Eden. Man, woman, nature — in Kane’s eyes, the eternal triangle. And then God weighed in, damning them for their human appetites. (How many of us felt puzzled that the Original Sin, the bite of the apple, seemed like nothing more than a thirst for knowledge? Our deities like us ignorant!) The triangle was Kane’s motif to the point of obsession, symbolic of humankind’s twisted relationship with nature on one part, but, on another, emblematic of the power of women. We’re talking about the Delta of Venus. From beginning to end, we saw V for Vagina, subtle in the lace inserts on a black slip dress, inescapable in the PVC triangle that pinned down a satin babydoll.

“The Original Sin? We’re so good at it,” Kane said, his blithe spirit effortlessly encompassing satanic cults and backstreet slap and tickle. He claimed “saucy knickers” were his starting point, but that notion would scarcely register with the customers who look to him for cutting edge fashion ideas (his specialty!). So he stripped knickers of any lingerie connotation and sharpened them into yet more triangles. The most haunting manifestation was a grey grandad cardigan worn over a black bandeau and a polyhedron pencil skirt. Years of therapy in that one look alone. A navy knit over sheer black lace ran it a close second.

Kane’s musical collaborator Simon Halsberghe excelled himself here. With Garden of Eden as a brief, he exhumed a track named exactly that from 1957 by Dick James, who would later make squillions as the publisher of the Beatles and Elton John’s music. Halsberghe transformed an Elvis-lite ballad into aural dread, with the addition of martial electronica.: “When you walk in the Garden of Eden with a beautiful woman, and you leave her there…” Well, good riddance to dumbass Adam! Kane has always exalted a strong woman. And there was so much more here that was devoted to unhinging patriarchal propriety, which is usually when Kane is at his best. The collection’s signature frisson was the decorative element supplied by gel implants. They were used as harnesses, pocket trims, hood ornaments on shoes, and their lurid gluiness was perfectly in tune with the same off-kilter sensibility that produced luminous green gothic lace and a sloppy, skewed red sweater that should be all the wannabe-bad girls’ go-to next season.