This was the designer's most direct men’s collection, but that diminished not a whit its power or appeal. 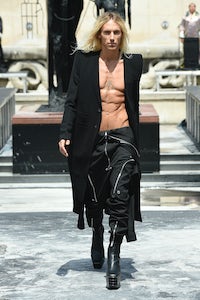 This was the designer's most direct men’s collection, but that diminished not a whit its power or appeal.

PARIS, France — Agent Orange wants to build a wall between Rick Owens’ 85-year-old mother and her family in Mexico, and Rick’s activist gene has been triggered. When he was growing up in Porterville, California, his dad worked in the public court system as a translator for Mexican migrant farm workers on behalf of the United Farm Workers Association. In his new collection, the UFW eagle logo appeared on T-shirts and overshirts. The profits from their online sales will go to the organisation. “I’ve always been very conscious of responsibility,” Owens said before his show on Thursday. And there is no responsibility greater than family.

That was surely on his mind with his new collection. Owens named it Tecuatl, his grandmother’s Mixtec maiden name. He invited four Aztec musicians from Mexico to accompany his show with ceremonial sounds. They also performed a blessing ritual backstage, and assisted Owens in the translation of an extraordinary tape he’d just received from his mother, her singing an Aztec song her grandfather used to sing to her grandmother. The sequins that decorated the china poblana skirts she wore in school pageants in Puebla, Mexico were a stand-out decorative element in this collection (the Aztec conch-shell player was also draped in gold sequins).

But while Owens agreed that all his collections were autobiographical, he insisted there was nothing so literal in them. Maybe it was a recent trip with his wife Michele Lamy to see the pyramids in Tulum that inspired the design on a coat. Equally, they’ve just got back from Cairo (they want to move there) so pyramids were obviously in the air. Or maybe not, though they are a particularly appropriate reference for Rick’s fascination with antiquity. A more significant detail was the thick lattice of lacing on clothes and shoes. This came about through a collab with the artist Thomas Houseago, currently on show in the Musée d’Arte Moderne, adjacent to Owens’s outdoor venue. Central to the designer’s show setting was a huge, hunched, skeletal form, ominously incinerated. Though it looked like it was straight out of the Rick Owens Props Playbook, it was actually a Houseago, installed for the exhibition, which meant it couldn’t be moved. So, in a classic case of if-you-can’t-beat-‘em-join’em, Owens invited him to contribute. It was another Houseago that inspired the invitation, and tonnes of clay from his LA studio were shipped to Paris to form the runway. (After the show, it was transported to the Ecole des Beaux-Arts to be used by sculpture students.)

A sense of community has always been fundamental to Owens. He and Lamy have created their own family of likeminded souls. But between Larry Legaspi last season and the Aztecs and Houseago this, I’m feeling a different kind of engagement from Owens. As much as he calls himself “a pessimist and a cynic,” as much as he acknowledges the wickedness of the world, he talked about its loving side too. And he is showing us things that matter. They could be as direct as Veja’s environmentally friendly sneakers, or as abstract as the light that shone from these clothes, not only the shimmer of the sequins, but the sheen of the fabrics: the iridescent canvas, the cotton duchesse, the taffeta. Even Owens’ signature stompers let in the light with platforms of transparent plexiglass. Maybe this was his real Glam collection. The multi-zippered jumpsuits were uniforms for a young army mobilising for change. (I couldn’t tell you why they reminded me of David Bowie, but they did!) And the tees with their deep-v necklines had an air of sensual challenge to the status quo.

I chose to believe that Owens was using his model casting to broadcast that this was his most direct men’s collection ever. But that diminished not a whit its power or appeal. In fact, it left me shivering with anticipation for the upcoming women’s collection in which he will hopefully elaborate on his family planning.