The Pleasure and Agony of Creation at A-Cold-Wall 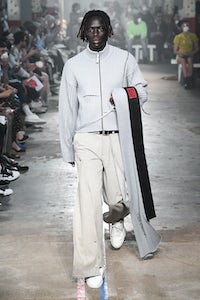 The Pleasure and Agony of Creation at A-Cold-Wall

LONDON, United Kingdom — Maybe it’s his background in graphics and product design that has made Samuel Ross so fiercely, unabashedly analytical. He referred to his new collection for A-Cold-Wall as “a sartorial somatization of the visceral emotion of physical space and architecture." I had to look it up. Somatization = a physical manifestation of distress. A big, clever word. “Luxury means intelligence,” said Ross. That being so, his latest work definitely took steps in a richer, more sophisticated direction. And that definitely ameliorated the obfuscation (just to throw a couple more big words at you!).

The kit we were handed on entering the venue (it felt like another concretely carpark-ish location) was certainly prep for “physical manifestations of distress”: a face mask, safety goggles, earplugs. It turned out they were to protect the front row from any peripheral damage during the finale, in which a coven of mole people furiously tore apart a polystyrene monolith to reveal a red(blood?)-drenched man, curled naked in a fetal position. He then rose from his primal state to arduously shove the whole structure backstage. Choose your metaphor: rebirth, or the agonies of creation.

The scenario was certainly fearless in its pretension. “I have to take these risks,” Ross acknowledged. Maybe its because he’s done all his growing up in public, first as Virgil Abloh’s right hand, then, for the past three years, as A-Cold-Wall. It’s taken scarcely that long to build a business which he proudly declares grossed £3.5million last season. The risk taker is clearly an astute businessman.

But that’s ultimately less interesting than the story Ross is telling with his collection. It’s not a happy one, he conceded. His invitation – shattered fragments — offered a clue. His clothes elaborated on that. You could literally lace or strap a look together (an idea Ross shares with London’s great menswear thinker Craig Green). The padding, the inflatables (like flotation devices), the asymmetric panels for added protection all compounded the concept of a terminus, the cold wall into which you don’t want to run.

Ross loves that hard surface. He cites Anthony Caro, Richard Serra, Stanley Kubrick as reference points. But he’s still growing. He said he feels freer, more able to articulate his ideas. So the story, happy or not, felt more inviting this season. There was a softness in ribbed knitwear, an attention to detail (eyelets, zip pulls, new dyeing techniques, and small artisanal details, like the fringe that trimmed a panel appliqued on a top) which suggested the pleasure rather than the agony of creation. More curves, fewer corners. Ross has already said he wants to be around for 40 years. Fortunately for him, Sunday morning suggested he has a lot more to say.