Garments burst open by a female belly were an intense reminder of the primal power of pregnancy. 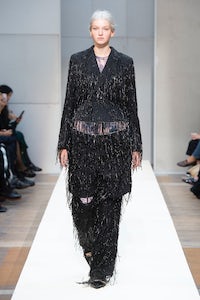 Garments burst open by a female belly were an intense reminder of the primal power of pregnancy.

PARIS, France — Comme des Garçons' show on Saturday produced one of the most stunning images of the entire Spring season: a model walking in a hybrid trench/culotte one-piece with a slit at the front through which protruded a huge pregnant belly.

The same idea was repeated throughout the presentation in various ways – the protuberances eventually moving backside or sideways, the clothing evolving into something more recognisably female – and there were definitely outfits that were showier or more decorative (a couple of pieces were cracked open like cartoon eggs) but it was that particular look that stuck with me.

There was something so stolidly male about it that to see it burst open by a female belly was an intense reminder of the primal power of women. When all is said and done, there are only two fundamentals: birth and death.

Rei Kawakubo’s collections are seldom so explicit in their implications, so far be it from me to suggest her show could be read as a gesture of solidarity with any woman making a stand against a pervasively abusive patriarchy, though two of her models were weighed with chains, their shoulders wrapped in the remnants of a suit jacket, their bodies shrouded in long filmy gowns, like penitents. God only knows why they made me think of Joan of Arc, martyred by men.

A text released before the show did, however, detail a change in Kawakubo’s working methods. Following on from the abstractions of the past ten seasons, she’d resolved to look inwards, to find “what’s deep inside.” A profoundly internal approach, she called it, quiet and serene. That more reflective, personal note was instantly apparent in the relatively linear sobriety of the silhouettes, compared to the extravagance of recent seasons. At a stretch, you could imagine Kawakubo herself wearing the clothes.

What’s deep inside evoked echos of Comme's past, the way some looks referenced the draped and knotted detailing that defined early collections, the way others were like a new version of Kawakubo’s legendary “lumps and bumps” from 21 years ago. Some models wore bodystockings of newsprint (“Only the shells whine”, read one headline, suggestive of war coverage, another timely reference.) Others had rose tattoos, symbolic of promise, hope and new beginnings according to tattoo lore.

It wasn’t just birth and death, there was also light and darkness, white and black. “Advancing ahead while fumbling around in the dark”, read Kawakubo’s text. Ever onwards she goes, fearlessly, in hope. Julien d’Ys kitted out the cast in long white wigs, like wise women. They will win in the end.