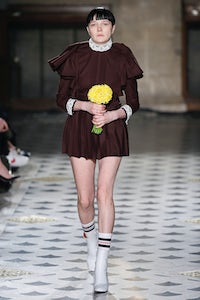 PARIS, France — Parked on a pew in the American Church in Paris for Vetements’ show tonight, one drifted back across the decades to reflect on other presentations in other places of worship: McQueen, Gaultier…didn’t Miguel Adrover show in a synagogue at one point? All three were at a transgressive peak in their careers when they staged those events (more recently, Alexander Wang aimed for the same impact in New York with rather less success), so it didn’t take much effort to add Vetements to the list.

Demna Gvasalia and his sect — which sounds more suitably intense than the more conventional designation “tribe” — have lit a hellfire under fashion. Vetements has already shown in a Chinese restaurant and a gay sex club. ‎Gvasalia claimed church was a logical next step. Especially the American Church in Paris, given that the new collection was an American collection. (Of course, there was always the American Embassy or the American Hospital, but one imagines there’d be “issues” with either of those locations.)

Much has been made of Vetements’ instant appeal to a new fashion audience. “It resonates,” insisted Katy England, once McQueen’s, now Tisci’s stylist extraordinaire. Aside from the fact that everything resonates with the young now — they’re tuning forks in a multiverse of digital noise — the point she made nudged her neighbour to contemplate the foundations of that appeal. Shazam!

No, really…Shazam! Shazam the last track on the soundtrack tonight. It was Sisters of Mercy’s sepulchral metal, said Gvasalia, minutes before the show. Metal, soundtrack of the American heartland, enduring music of the outcast and the maverick schoolkid. AC/DC’s Angus Young used to be one, albeit on the other side of the world. He’d come to gigs straight from school with his uniform in disarray, shirt untucked, tie akimbo. There was some of that on the Vetements catwalk.

The show invitation was a rose, a recurring motif reproduced the logo for The Eleven Inch Gun Club, guns and roses decorated tooled-leather thigh-high cowboy boots (!!!). Guns N’ Roses, obvs. There was more metal iconography: a pentagram woven into a sweater, an oversized skull tee with Vetements scrawled across it in metalloid script, like a band name.

The super-shrunken proportions of the clothes (the fabrics washed at high temperatures, said Gvasalia) suggested the post-pubertal hunch of heavy metal hoodies. And the general air of sullen disaffection was amplified by sarcastic feel-bad sloganeering like “Are we having fun yet?” Titanic’s young lovers, stars of Spring’s sweats, were replaced by the Gothic-scripted enticement to “Drink my blood and live forever.” (All the slogans were lifted from the Internet.) Demna was wearing “May the bridges I burn light the way,” which sounded tailor-made for sneering at concerned friends, relatives and ex's, though he insisted it was uplifting. On reflection, he may have been right. The phoenix is reborn in fire.

To continue with the proposition that the new Vetements collection was a meditation on Americana: the show opened with a reading of “A Song,” a poem by Joseph Brodsky, poet laureate of the United States and, according to the Librarian of Congress, “a reminder that so much of American creativity is from people not born in America.” There were ruffled floral pieces that evoked pioneer women, and a guy in a cowboy shirt, under which he might have been wearing football pads (two US icons in one).

There were those cowboy boots, and slacker plaids, and some gold velvet outfits that looked disco-ready. Moments in time, laden with associations. The familiar, provocatively re-conceptualised. That’s the only way to create the “new,” when there is really no “new” left. And what better backdrop for such a project than the US of A with its seemingly endless, distracting resources? At Maison Martin Margiela, where Gvasalia worked for eight years, there was a similar fascination with American arcana.

“We discovered the collection while we were doing it,” Gvasalia claimed. Spontaneity and contrariness would seem to be Vetements traits – we did that, now let’s do this. There’s certainly a resonance to that. As resonant as the this is ours, not yours sensibility that attaches itself to clothes as defiant as these. The maverick never loses its appeal. But look again, at how artfully logo-ed everything was in this collection. The revolution will be branded Vetements. 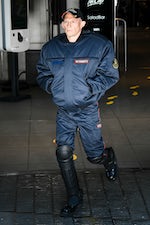 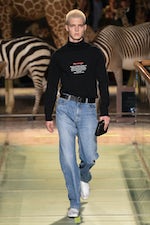 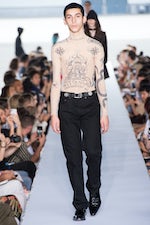 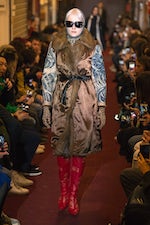