Ashley and Mary-Kate Olsen's designs are distinguished by deluxe minimalism. 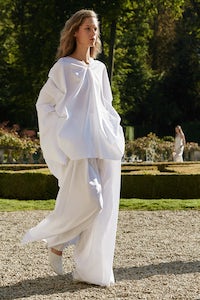 Ashley and Mary-Kate Olsen's designs are distinguished by deluxe minimalism.

PARIS, France — After ten years in business, it hardly seems worthy of note that the physically diminutive Ashley and Mary-Kate Olsen make voluminous, flowing things for their label, The Row, that authoritatively lay claim to a lot of space. Much more intriguing is the magic in such a notion, like Alice, feeding her head in Wonderland, getting small, growing tall. That romantic, hermetic notion was perfectly encapsulated in the fact that the Olsens showed their new collection in what Mary-Kate called “a secret garden”, in a chateau 45 minutes outside Paris.

The same insular romance was embodied in the product. Their mother always carries an old-fashioned coin purse. Here, it was writ Wonderland-large as an accessory of the season. So were the dramatic stars of the collection, like a mustard-yellow leather floor-sweeper, or an enormous, almost medieval clutch coat, which needed the grounds of a French chateau to do it full justice. Then, for magic on a smaller scale, there were sunglasses that revealed The Row’s logo when you breathed on the lenses.

“We’re not reflective, we just keep going,” said Mary-Kate during a tour of The Row’s showroom in Le Marais. They have made a virtue of familiarity. Their followers would recognise much in the new collection — and that’s exactly how they like it. Seasoned observers note that the Olsens could be considered heirs to the legacy of Yugoslavian-born, New York-based designer Zoran, in the sense that their designs are distinguished by deluxe minimalism. “It starts with fabric,” said Mary-Kate. But, in addition to the linens, silks and taffetas in a monochrome palette, spring also featured a reversed jacquard dress, and a tone-on-tone embroidered coat, both with a subtle, textured richness that, again, loaned itself to the grounds of a chateau. The models walked in silk taffeta slippers — footwear for Wonderland. 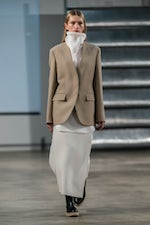 At the Row, a Surgical Precision 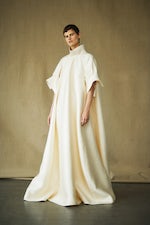 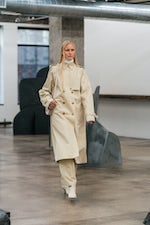 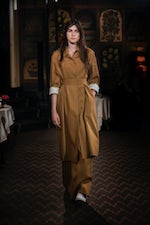 At The Row, Present and Correct