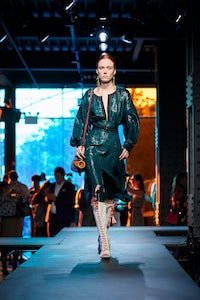 NEW YORK, United States — DVF was pleading with Jonathan Saunders to take a bow after the collection he’d just shown for her, but he wouldn’t step up. It’s her name on the label after all and her life his designs continue to celebrate with such winning verve. Sunday afternoon’s presentation was no exception. Saunders once more returned to the 70s well that eternally refreshes the Von Fürstenberg legend, with all its disco glamour. Except he nicknamed this new outing “Pet Shop Boys meets Studio 54” in recognition of the poppy, synthetic pulse of the collection.

It was all in the colour and the sheen. The geometrical colour-blocking was inspired by Saunders favourite Frank Stella, the glittering surface of dresses came from a blend of lurex and silk (or, sometimes, sequins), which slithered down into swirling scarf hems, 70s to the core, like the platform shoes that accompanied them. There were also wide-legged pants, just like David Bowie wore on the sleeve of Hunky Dory, said Saunders.

It was that kind of personal reference – and the Stella – which underscored how effective Saunders has been at weaving himself into the fabric of the DVF story. Like the floral prints in this collection, based on wallpaper he remembered from his childhood in Scotland. (The patterns were hand-painted in the DVF studio.)

Still, he wouldn't take a bow, and maybe that's one reason why the Jonny’n’Diane Show has turned into such a gratifying exercise in mutual admiration and support. If an easy body-consciousness was always the default position of both designers, it’s evolved into something more provocative, a slouchy glamour with a seductive twist of well-seasoned eccentricity.