The Spell Hasn't Broken at Gucci

Alessandro Michele's latest collection was a riposte to everyone who wonders when he is going to move on from the outlandishly fabulous signature he’s created for the house. Simple answer: he’s not. 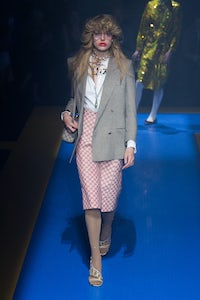 The Spell Hasn't Broken at Gucci

Alessandro Michele's latest collection was a riposte to everyone who wonders when he is going to move on from the outlandishly fabulous signature he’s created for the house. Simple answer: he’s not.

MILAN, Italy — From the very beginning, it was a risk. “I started like a gambler,” said Alessandro Michele, “and I’m still working like a gambler.” He’d apprenticed under Tom Ford at Gucci so he knew the rules. “And I knew this was completely against the rules.”

This is the Gucci Michele gambled on. He compared it to an act of resistance in the notes for his show on Wednesday afternoon: resisting “the mantra of speed that violently leads to one losing oneself”, resisting “the illusion of something new at any cost”. Those sentiments were a riposte to everyone who wonders when Michele is going to move on from the outlandishly fabulous signature he’s created for the house. Simple answer: he’s not. Those notes, always essential for the illumination they throw on the thought processes behind some of the most defiantly, head-scratchingly fantastical creations in fashion, went on to laud “the courage to slowly linger”, the refusal “to turn the page”. In other words, STOP! SIT! THINK!

Fashion’s always in a race to catch up with itself. Michele’s signal achievement has been to slow the race to the point where people have been given the chance to catch up with fashion, or at least the work that he’s been doing. By not surrendering to fashion’s doctrine of ever-changing novelty, he has allowed an ever-growing audience to savour his strangeness over time so that when they decide they’re ready to order from the Gucci menu, they can find something very similar to the offering that initially stimulated their palette. To a degree unprecedented in my admittedly fitful memory, the audience at Michele’s latest show was wearing clothing by the designer. Old, young, male, female…it was a Gucci carnival. A celebration! And it felt like it ain’t stoppin’ any time soon.

The show itself was staged like a rave in the Pergamon, the museum in Berlin which is home to some of the most marvelous antiquities anywhere in the world. Alternately, it could have been a movie set at Cinecitta, the legendary Roman film studio which did, in fact, supply some of the 37 different structures (Asia to Aztec to Babylon and back to Rome) that were carefully placed around the cavernous show-space to subliminally recreate a map to the villa of Horace, Ancient Rome’s most famous poet, that Michele had found in an 18th century tome. Did you get all that? Really, all you need to know was that the setting was spectacular, magical, arcane. And when the models began their speed-march around the blue-toned catwalk (intended to convey Rome’s River Tiber) in blurry clouds of disco light and soaring electronic sound, it was clear that all Michele cared about was a mystical atmosphere, and to hell with the spotlit clarity of the usual fashion show that would seek to destroy the poetry of things that don’t exist, or things we haven’t seen. “I’m trying to destroy the old culture of fashion,” he admitted. Years ago, I said he was a punk!

And that punkiness was still obvious in the collection’s confrontational quality. All of it. Break it down into those elements that people judge fashion by. A dress. A pair of pants. A t-shirt. Plaids. Knits. Perhaps a hat. And there was a lot more tailoring than usual. But then add masses of sequins, and cryptic words, and cartoon icons, and Flash Gordon helmets, and hair-styling that looked like Farrah trapped in an A-bomb test. The peculiar, surreal beauty of the result is Michele’s achievement. The way it’s connecting with a global audience is his triumph. His notes invited you to “be yourself”. Before the show, he’d been speaking to a small group of journalists and he’d talked about “the spell that I put on you.” Which would sound arrogant if it weren’t for the fact that Gucci is some species of eldritch fashion hypnosis. The spell won’t break.