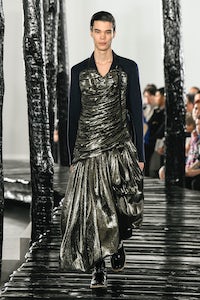 PARIS, France —  “Optimistic, cute, pretty boy.” That’s how Jonathan Anderson defined his new Loewe collection for men. He compared his clothes to a song: “how you can transform your character into anything you want it to be”. The transformative power of pop, in other words.

Michel Gaubert soundtracked the show with a shiny, happy piece of electropop from Young Galaxy, conveniently called “Pretty Boy”, perfect for kids practising dance moves in a mirror. The most striking looks in the show featured models with “aprons” of old-school lamé ballgowns draped over their black suits. “2D on 3D,” said Anderson. Like when you hold a dress in front of yourself, again in front of a mirror, and wonder what it would be like to try it on. And hope you’re not caught.

That’s the kind of tension that fizzes through Anderson’s work, for Loewe as well as in his own collection. I guess that was why the models passed by on a lacquered black boardwalk, crazily incongruous because it was so horror-movie when nothing else was. Anderson wondered if the tension in his work was sexual (wonder no more!). His own favourite looks were the business-y shirts printed with geese and roosters. Ties were knotted tight, fetish-y demi-skirtlets of leather links floated around trouser legs. “The boys could be into something,” he said with a knowing chuckle. But what? The collection offered so many possibilities. “A fantasy wardrobe,” Anderson called it.

He always has a wonderful craft reference at hand. This time, it was a 19th-century Glaswegian designer named Christopher Dresser whose travels in Asia had a huge influence on product design in Europe and America. Anderson was inspired by Dresser’s interpretations of the objects he found in far-off lands. Consider that far-off lands for Anderson are temporal as well as physical spaces, and you could see his proposals for this era being informed by the atmosphere of others, the 1920s more than anything. The models’ hair was Gatsby-slick, the elongated, sinuous silhouettes were flapper-worthy. There were feather trims at neck and hem, a mosaic cape was Chrysler Building Art Deco, Sonia Delaunay’s prints echoed through the colour-blocking on a couple of pieces. A grey flannel princess coat, collar immaculately furled, evoked the elegance of photographs in Vogue by Horst P. Horst and George Hoyningen-Huene. The cloche? The zebra print? In combo, arch-Jazz Age.

Anderson’s work exults in the off-kilter. The dominant look in this show was a coat – or variant thereof – worn splendidly solo. Legs were bared, begging the kilt-shaped question: what does a man wear under his Loewe coat? Shorts, said Anderson. He talked about tricking people into feeling it’s familiar. And, as with his own show the other day, it quickly seemed so. That’s how the 1920s, with all their baggage, slide into a new century. Be afraid. Be very afraid.