BoF's editor at large Tim Blanks offers his take on the duo's debut as co-creative directors of the house that bears her name.

BoF's editor at large Tim Blanks offers his take on the duo's debut as co-creative directors of the house that bears her name.

MILAN, Italy — Miuccia Prada and Raf Simons’ first collection as co-creative directors was defined by a gesture: a young woman clutching a cocoon of cloth across her chest. It’s a flourish that both Miuccia and Raf have used to great effect in their individual careers. Here, it seemed poignantly suggestive of things held together at a time when they’re in extreme danger of falling apart.

Togetherness was obviously what the duo’s digital debut was all about. In an online Q&A after the presentation of their collection, they looked as comfortably compatible as an old married couple, Miuccia in her navy sweater and white pleated skirt, Raf in a big, baggy jumper and his black always-Prada pants. The only thing missing from their digital fireside chat was a dog. Except this unprecedented coming together was so much more than a chat. It was, according to the accompanying notes, “a creative conversation,” and, like all good conversations, there were two distinct voices, exchanging ideas, bending this way and that, finding common ground.

Raf’s voice was right up front, in the show soundtrack by his favourite D.J. Richie Hawtin, aka PlastikMan, and in the cryptic word pieces that “interrupted and disrupted” (those notes again) a fair number of the looks. They were supplied by Belgian artist Peter de Potter, a longtime Simons collaborator. Miuccia’s voice was more the solid undertow of the conversation. I was just paging through Susannah Frankel’s “Prada Catwalk,” an overview of the brand’s collections starting more than 30 years ago, and it was quite stunning to see how consistent Miuccia has been in her subtly subversive radicalism, creating an entirely new lexicon of fashion which has shaped a generation of designers, whether they knew it or not. “Our present is done with our past,” she sagely observed post-show. And her past echoed throughout, most tantalisingly in the fabulous, even lurid kitten-heels (ideal footwear for Miuccia’s enduringly totemic bad girl,) most graphically in the echoes of Spring 1996’s “ugly chic,” with those prints that looked like couch covers from an early 60s motel (over-printed here with de Potter’s words.) You also had to wonder whether the sleeveless-tunic-narrow-pant silhouette that has long been a Simons staple — and was very present here — became imprinted on his subconscious through his 25 years of exposure to “Prada-ness,” as one of Thursday’s on-line interrogators called it.

Miuccia said the show was about simplicity, a very sensible place to start when all eyes are on your debut, as they were on Thursday. There were suits cut from fleece, coats in re-nylon, sporty hooded tops, a wool sweater and a swingy box-pleat skirt. There was also a black moiré clutch coat with an almost operatic volume, adding a spice of hubris to the humility. But ultimately, practicality ruled. There were plenty of pockets. 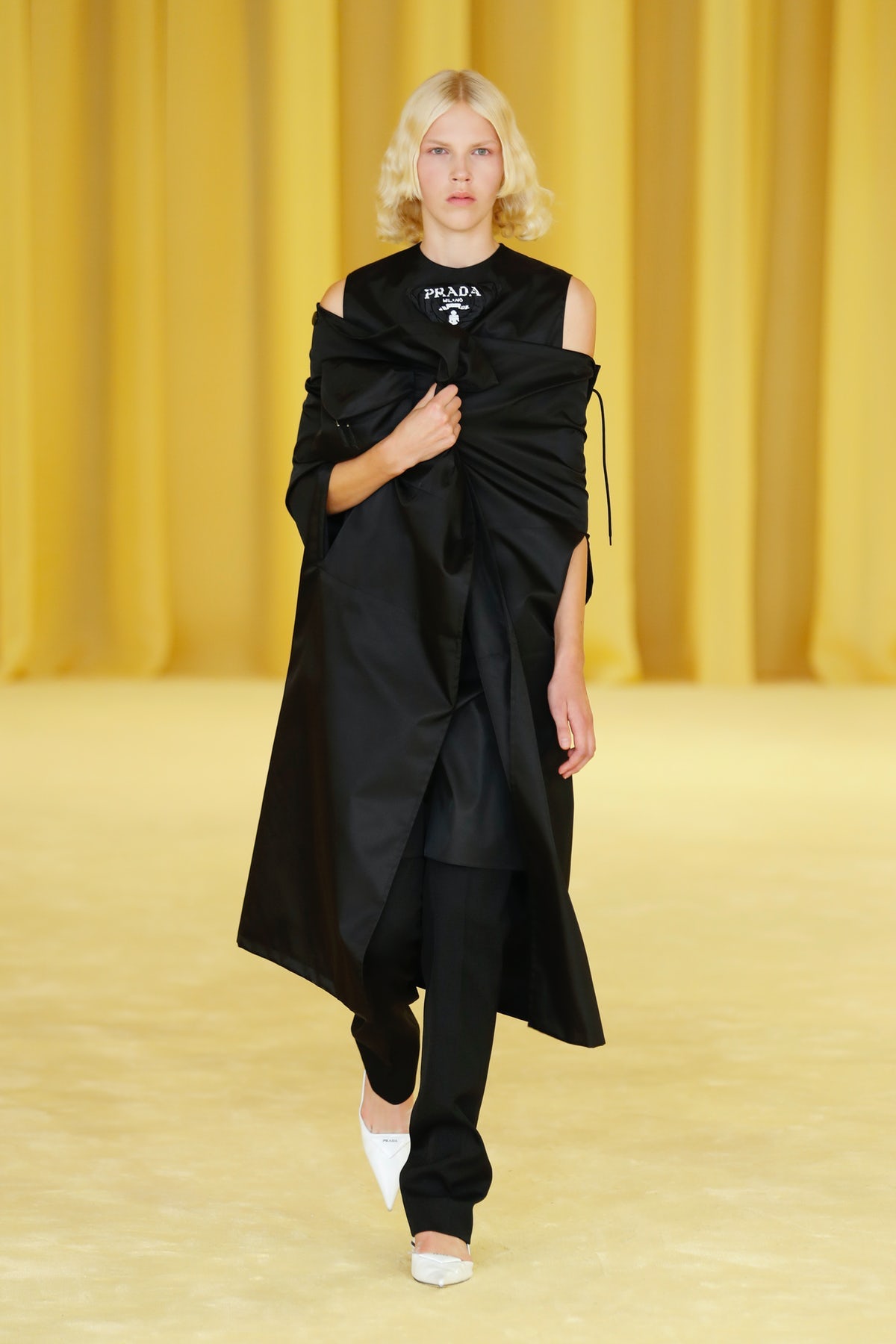 Both designers agreed that they’d prefer their work to be rooted in “the collective unconscious,” rather than a fashionable flight of fancy. They insisted that was where their attachment to uniform dressing came from, not in its military connotation, but in the sense of essential pieces that reflect a spirit of community. “A designer is good if your clothes can connect to other people,” said Miuccia. “The more they are connected to reality, the more your job makes sense.” Raf claimed her way of dressing, her uniform, was his direct inspiration for the collection.

The show was staged in a set conceived by OMA/AMO, who have worked with Prada for years. It configured a huge space with matching carpet and drapes in a corporate mustard (more charitably, a pale gold), like a deliberately inoffensive conference room. The models were scrutinised by a circle of cameras, suspended from the ceiling, with which they made very c’mon-direct eye contact. It was an almost confrontational embodiment of the relationship between human and tech that has been sealed over the course of the global quarantine. Miuccia was even talking about technology as another form of humanity. That sounded a little odd because I’ve always liked to think of her as a profoundly humanist designer, even if, since the early days of the black nylon backpack, there has been a strong industrial thread in Prada’s story. Here it was again, compounded by her intimate union with a fellow traveller who has also exercised a fascination with the industrial over the course of his career. 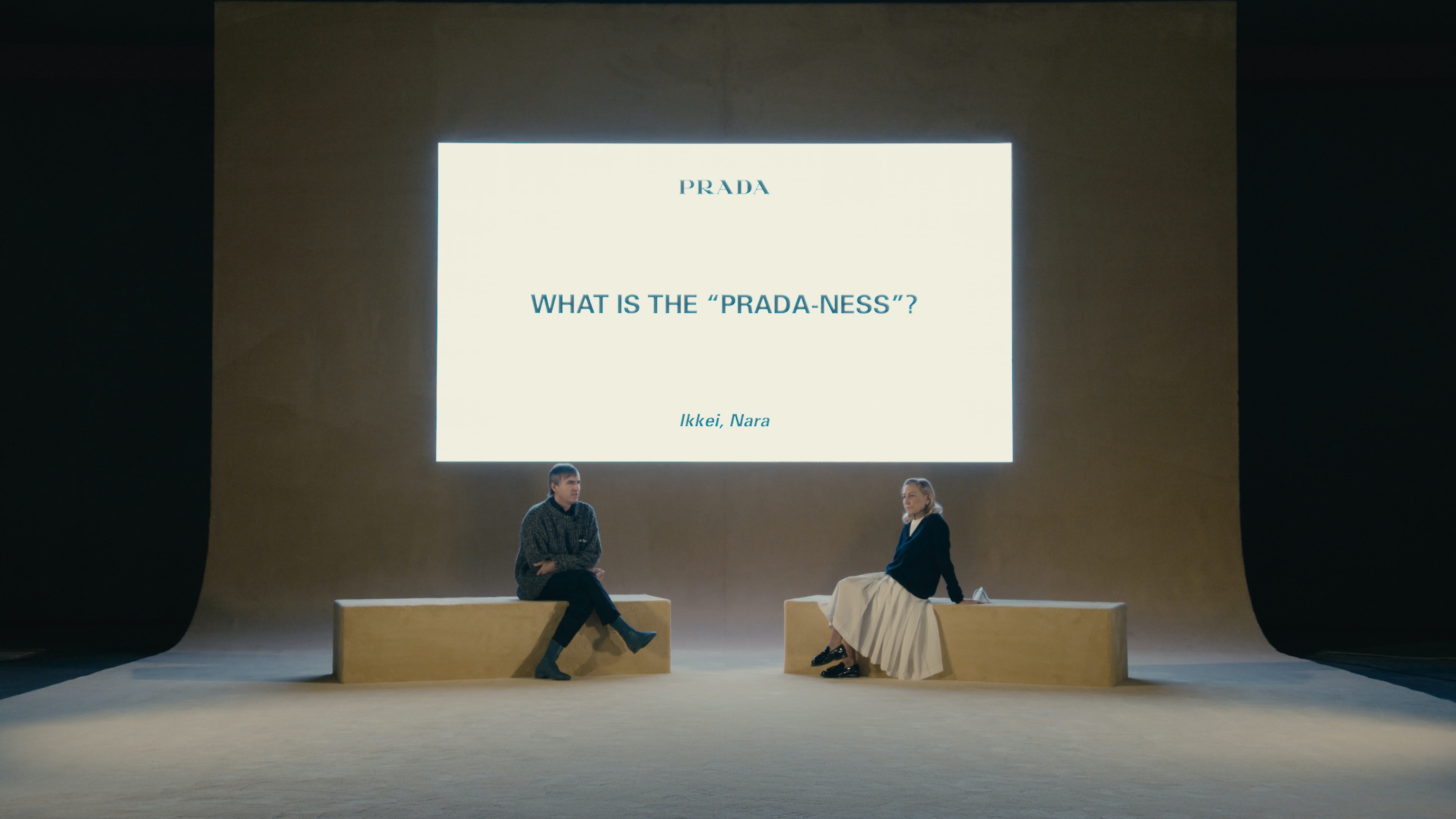 My niggle was that I was hoping when two people hooked up, as Miuccia and Raf have done, there would be a little more romance in the clutch. She said they didn’t really have much time to work together, given the exigencies of the pandemic. “With more time, it will be more interesting,” she added. From Raf’s perspective, it was important that they didn’t curb their individual freedom by creating a specific way of working. “It’s not literally two worlds sliding together.” One time, it might be her with him relating, next time, the other way round. “The beauty of it is we don’t know where we’re going,” Miuccia said.

And she’s right. This is, after all, just the beginning of what we all hope will be a beautiful thing.