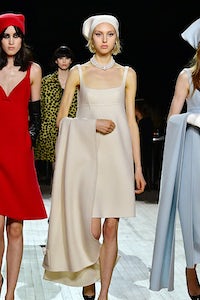 NEW YORK, United States — Catherine Holstein, the designer behind the New York-based fashion brand Khaite, said something backstage after her show that could make another kind of designer shudder: “I treat every piece as its own collection. I don’t design by collection, I don’t design by look, I design by product.”

It’s not that Holstein’s ideas don’t hang together. At her show on Tuesday morning, one of the few highlights of a crushing season for New York fashion, the carefully ruched baby-doll tops, gathered tulle pieces trimmed in rhinestone, leather trench coats and pleated plants in leopard velvet were a Nashville star’s dream wardrobe: so cool and sexy, rich and autumnal.

Holstein’s product-by-product approach may lack a degree of romance, but the results are compelling. At the shows this week, all the buyers were wearing her curved-heel, squared toe boot, which were introduced weeks before Daniel Lee’s fattened up version hit the runway at Bottega Veneta, proving that not all good ideas come from Europe. She’s not perfect — her bags, standard in shape and treatment, could be more inventive — but what Holstein is currently achieving without the backing of a big group is pretty remarkable. 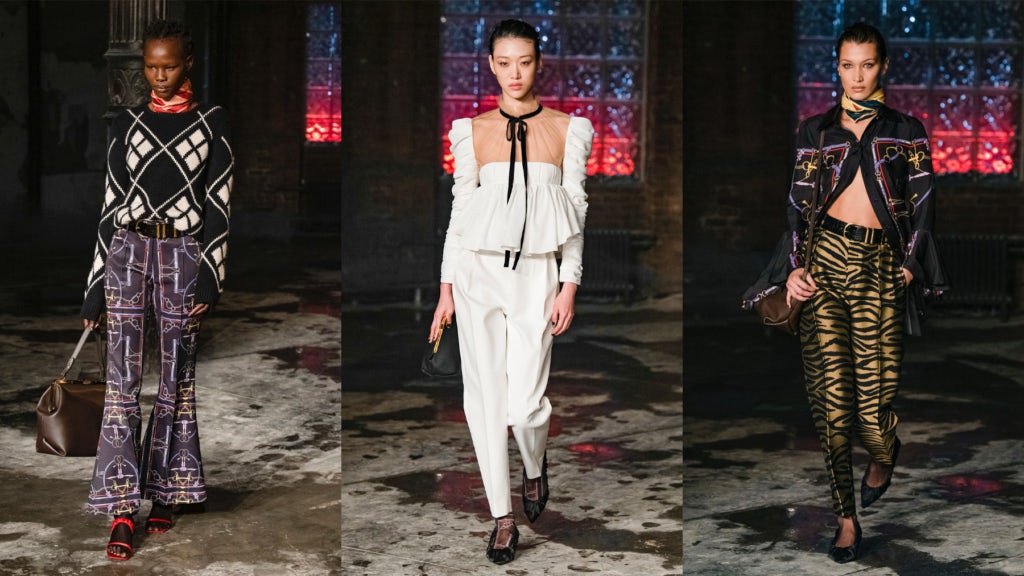 There are few designers working out of New York right now for whom the same could be said. (Old Céline-alum Peter Do, who shows in Paris on the pre-collection calendar, is a Brooklyn-based talent to watch.) But many of those finding success on the New York schedule happen to be women. Gabriela Hearst, who has taken a small investment from LVMH Ventures, continues evolving her horsey, salt-of-the-earth aesthetic into a believable luxury lifestyle brand. The Row may use the most expensive fabrics in the world, but Ashley and Mary-Kate Olsen’s show was economical: just four minutes long, it finished 12 minutes after the scheduled start time. They once again showed at their studio, this time among the sculptures of the late Beverly Pepper, who passed away on February 5 at 97. In terms of new ideas, the three-piece suits turned heads, as did the long cashmere gloves. Each season, the collection is purer and purer, the ideas more distilled, the vision clearer. 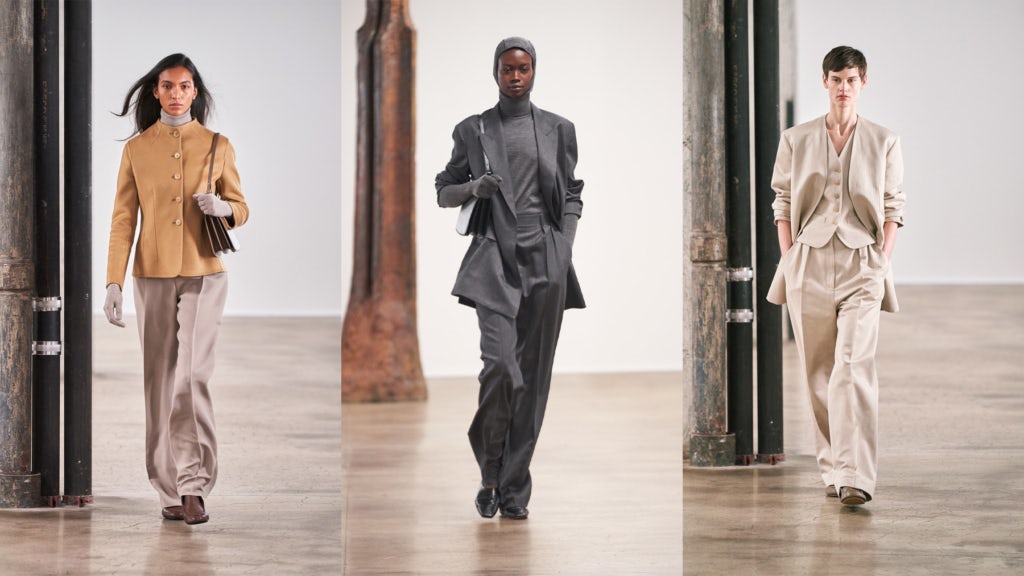 Tory Burch seemed more focused this season, too, as her models sauntered through the halls of Sotheby’s. She’s still riding on the Sloane Ranger revival, but this collection felt more relaxed. Rosie Assoulin, best known for her namesake collection of gala dresses, presented her day clothes line, By Any Other Name, at the just-opened American Bar in the West Village. Her new overture, suiting and separates that are just a little bizarre, will help to fill the empty hangers in her fancy-dress customer’s wardrobe. And then there was Rachel Comey, whose fabulous dinner and salon at the restaurant La Mercerie was upstaged only by the clothes themselves, a wardrobe filled with Faire-isle sweaters and skirts padded at the hips with spangles.

For those following the young designer crowd, there wasn’t so much to see. One of the highlights was Area, which showed uptown at the Africa Center on the northeastern edge of Central Park, and made a good argument for designers Beckett Fogg and Piotrek Panszczyk's ability to create well-crafted clothes with an identity that isn’t so reliant on those who came before them. It looks like real fashion.

Eckhaus Latta, too, have something: they know how to make a nice-fitting pair of jeans, like the black pair splattered with green paint in their show on Tuesday night, which was held in a hollowed-out building that was previously an Abercrombie & Fitch store. ("It still smells like it upstairs,” Zoe Latta said after the show.) She and design partner Mike Eckhaus once again demonstrated a certain thoughtfulness: they pulled their shoes from resale site The RealReal, adding another layer of reality to their proposal of spacey knits and crepey separates, this time often rendered in crayon colours. But there is something that’s starting to feel monotonous about what they do: they could stand to bring some more vulnerability to their designs. Vaquera, a designer trio inching towards something bigger, are at a pivotal point, too. 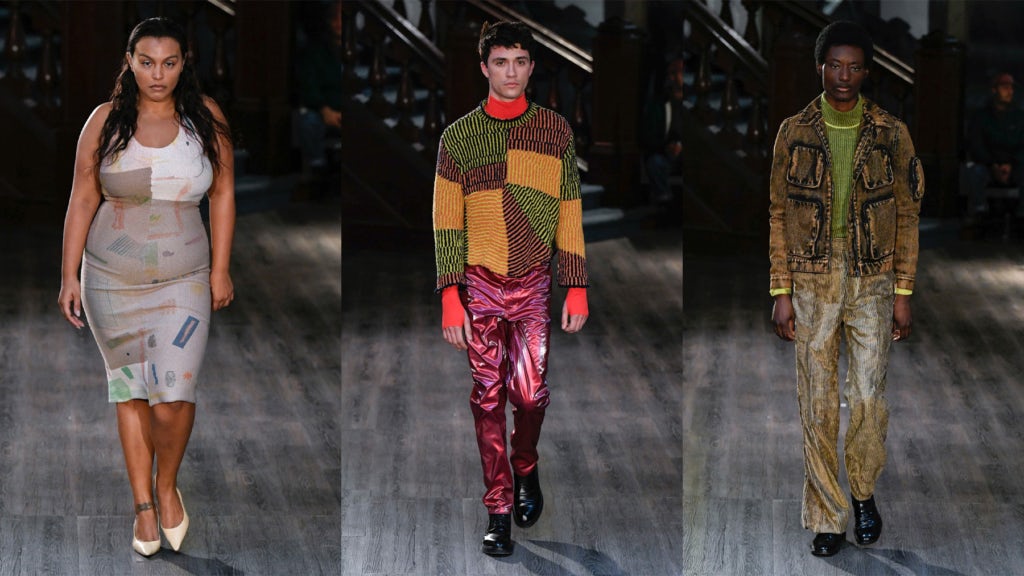 Much of the existential crisis happening in New York has to do with a lack of capital. I met with Michael and Nicole Colovos on Monday, whose namesake line of workday blazers and denim trousers was exclusive with Barneys New York for the past few seasons — and performing well before the store went bankrupt. They’ve got a cool product that’s produced in a responsible way, and that’s not too expensive, either. Their concept is strong enough to survive, but their ability to move forward has been stymied signing with a retailer who wasn't able to do the same. 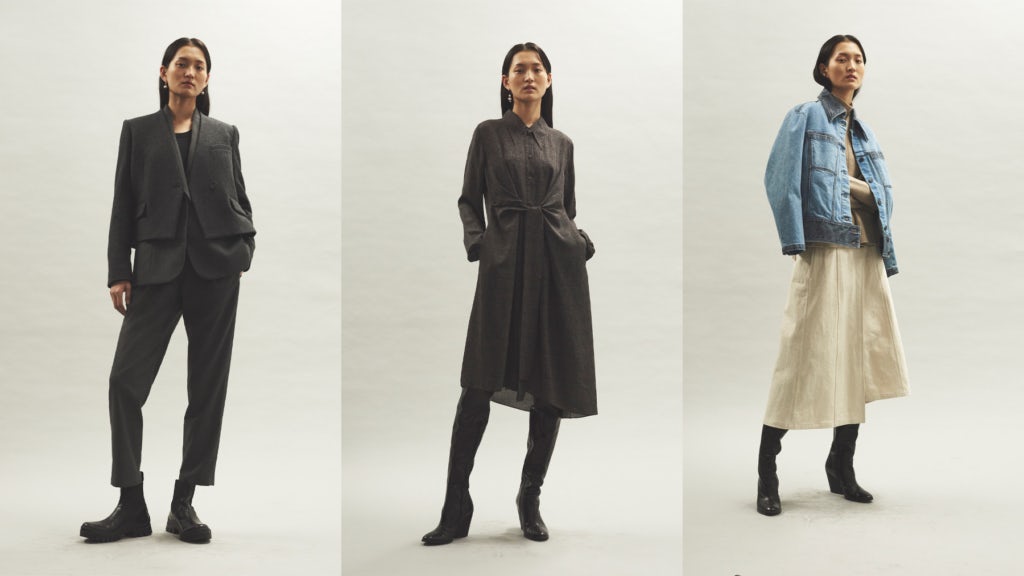 This feeling of being stuck emanates not only from brands that have been in business for a couple of years (and pretty much all say they need “just $1 million” to get them to the next level), but also with the brands that have been in business for 10, 20... even 40 years and don’t have the infrastructure to compete with the major European players. I can’t unsee the cheapness of many of the items — in particular, the shoes and the bags — that are produced by these New York brands, but it almost feels unfair to judge them against a label backed by a massive conglomerate.

The show pony designers, the ones that have branded themselves as stalwarts of New York Fashion Week, are the most exposed. I was impressed by Brandon Maxwell’s latest collection of floating pussy-bow gowns, which felt less self-conscious than season’s past. “He wants to be taken so seriously that it can sometimes look too tense,” said my colleague Chantal Fernandez, who reported on the show, which took place inside the Natural History Museum. “This was more relaxed overall.”

Oscar de la Renta designers Laura Kim and Fernando Garcia, who showed in another New York institution, the Public Library, seemed more determined than ever to focus solely on the desires of their clients. With an inspiration board covered in images of Mickey Mouse in Fantasia, Caravaggio and Truman Capote’s Black & White Ball — a more powerful trifecta than one might imagine — this was all fantasy, with gowns exploding with sequined fireworks. Jason Wu, whose company was acquired last year by Chinese private equity fund Green Harbor, also zoomed in on what he knows he does best: delicate pleated tulle dresses, charcoal wool day wear piped in hot pink. 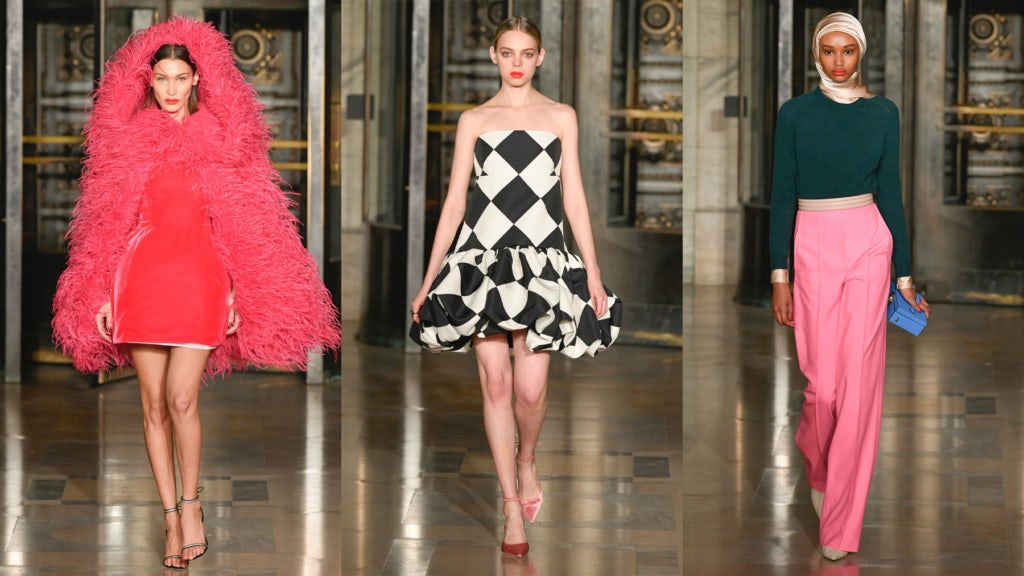 The problem for Wu, though, is that this collection had no sense of time or place. It could have as easily been released a decade ago. Having signatures is good, but what makes it feel good for right now? The same could be said for Prabal Gurung, who has made himself a red carpet fixture in his 10 years in business. But he has never quite got the rest right. 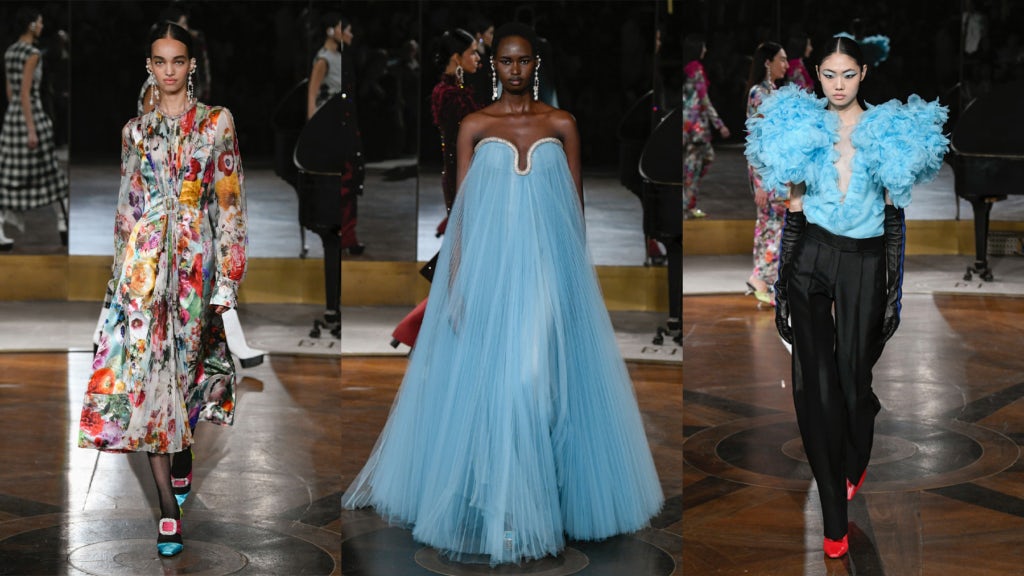 During his intimate show at the Rainbow Room on Tuesday night, Gurung delivered suiting and knit dresses that were meant to fill in those gaps. He may be a great entertainer, but he doesn’t have a bag to sell or a fragrance, something Wes Gordon has gotten quite good at during his tenure at Carolina Herrera. In a time when many brands are questioning the point of having a fashion show, Gordon, whose collection was full of single flashes of flamboyancy — like a fat square belt on a silk skirt — rather than a pile-on, was all about selling the dream. Not only will these pieces go down well with the ladies, but they’ll also bring his fragrance advertisements to life.

Sies Marjan’s Sander Lak gave his collection of melancholy overcoats and 3-D textiles relevancy by collaborating with the likes of Rem Koolhaas, whose Guggenheim exhibition opening next week is being co-sponsored by the label. But as with Proenza Schouler, which had a good-but-not-great showing, there are high expectations for Lak; it would be a thrill to see him surpass them.

One pleasant surprise came from Rodarte’s Laure and Kate Mulleavy, whose ode to Francis Ford Coppola’s “Bram Stoker's Dracula” was also a strange and wonderful bit of Americana set underneath the chancel of St. Bart's, a famous Park Avenue church. Who needs practicality when you've got Forties-style tea dresses covered in hearts and hand-painted tropical gowns, pearls dangling from extra-long gloves and glistening silver beads covering every inch of a cropped jacket boasting padded shoulders and the requisite sweetheart neckline. This isn't a commercial collection, and yet every season, I see the row of buyers energetically snapping photos, their eyes smiling. You can't count Rodarte out. 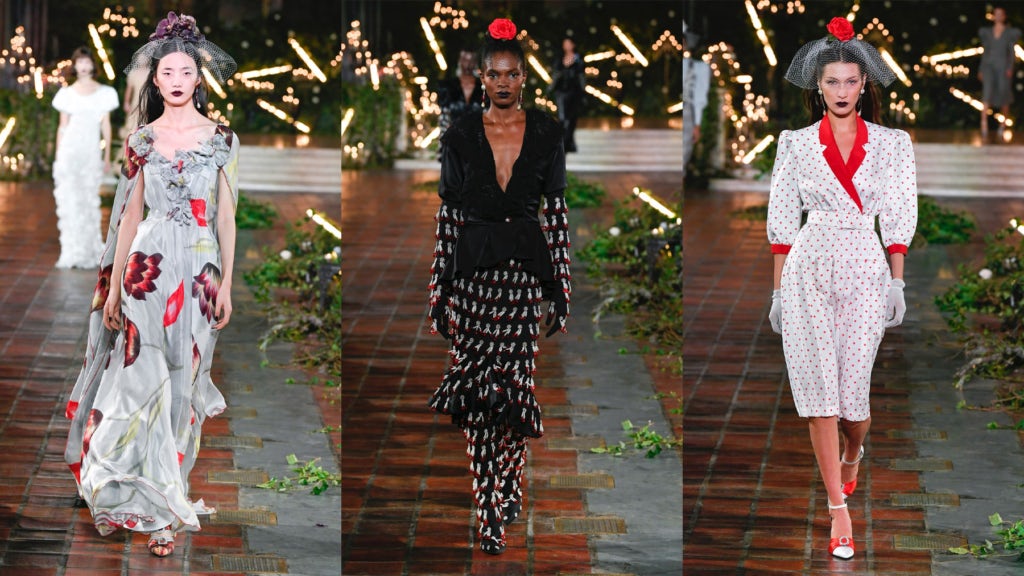 A friend who has been in the industry for more than 30 years asked why I thought Rodarte isn't given the same fanfare as Marc Jacobs, whose show on Wednesday once again stirred the audience. This season, it seemed that Jacobs paid no attention to what was happening in American fashion outside of his own purview. His modern dance experiment — executed by “punk ballerina” Karole Armitage and her incredible company — wasn’t about saving New York Fashion Week, it was about acting on instinct. He did not let the general malaise ruin his good time.

In his show notes, Jacobs expressed a desire to showcase the quality and construction of the clothes themselves, without losing the sense of individuality that he has brought to recent collections. Unlike many of the showpieces he has presented as of late, those lightly sculpted wool-cashmere dresses and round-neck cardigans — reminiscent of the kinds of things he was once better known for — were made to be worn, as demonstrated by the 88 models, plus 55 dancers and Armitage, each in a different look, thrusting into an audience clustered at tiny café tables. 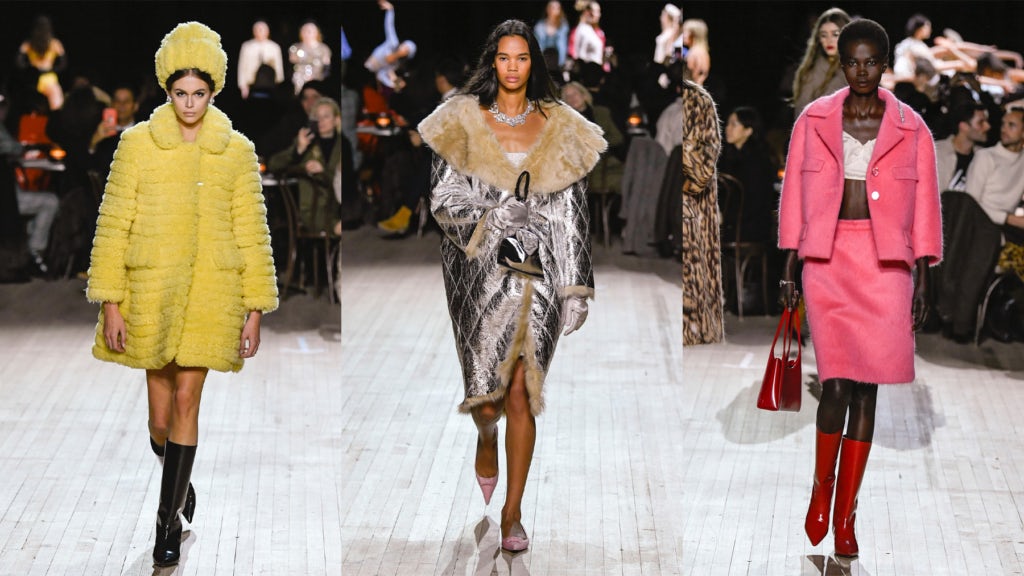 Jacobs stands apart because he is a brand unto himself. He cares about being relevant in culture beyond his clothes, and uses Instagram, as well as tactical magazine profiles, to propel his personal celebrity. But it has more to do with his business model, which, like Carolina Herrera’s, is rooted in selling fragrance and beauty. His clothes will sell or they won’t. It doesn’t really matter at this point, as long as they help sell everything else.

Michael Kors, whose collection this Wednesday morning was presented with a live soundtrack from masked country music star Orville Peck — he sang Dolly Parton’s “I Will Always Love You” — is in a different situation. His cashmere ponchos and cable knit sweaters have to not only sell fragrance and beauty, but a whole other line of affordable clothes and bags. Whether or not he can finally scale the luxury part remains an unanswered question. 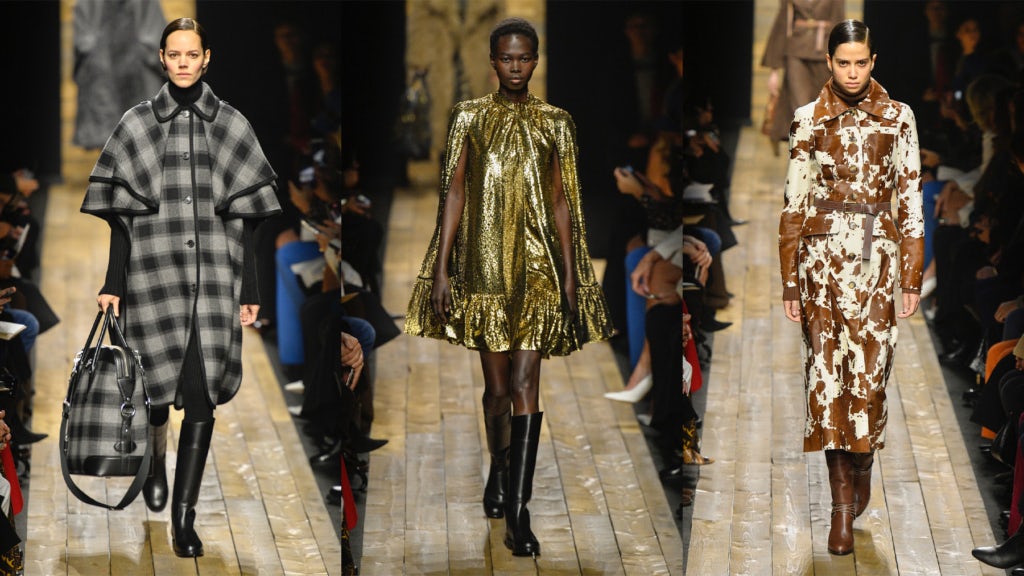 Michael and Marc are the only ones of their era left at New York Fashion Week. The designers who came up after Jacobs were sold a false bill of goods: that if they had talent and a bit of charisma, they would be picked up by department stores, featured in American Vogue and, ultimately, hired by a European fashion house, which would then buy into their own brand, bringing fame and fortune with it. But we all know how that turned out for most of them.

So, if you want to be the next Marc Jacobs, it's time to reevaluate.

If, however, you want to be Insert Your Own Name Here, and forget about past pretensions and dated business models, you have a fighting chance. The old way of doing things doesn't work any more, if it ever really did.