PARIS, France — Eco-whatever was all over the place at the Paris fashion week that closed yesterday. It was rarely convincing. The idea of designers and houses acting responsibly, going carbon neutral, upcycling fabric, reawakening deadstock and generally adopting a more eco-conscious approach is, of course, a positive prospect. But turning it into a PR strategy is obnoxious. Sustainability, whatever that actually means, should be about taking action, not sending press releases. And yet, in today's mediatised world, the announcement is already the accomplishment.

At Tuesday’s Dior show, gardening was centerstage. The set was a marvelous forest of trees from a variety of geographies — an “inclusive garden” according to the show notes — each one destined to be replanted in a different area of Paris after the show. But it was little more than a fantasy. Outside the show, a sea of black cars, many with their engines running, waited for editors and buyers to come out and zoom off to the next show. Fashion will only be sustainable when we return to doing less and doing it better: now, that would be a meaningful choice. But will fashion’s corporate giants cut their endless feed of product? I doubt it.

Fashion is wonderfully superficial. So, sustainability was everywhere, though mostly in the press notes and the flowery patterns, burlap dresses, gauzy fabrics and Greta Thunberg braids. At Dior, Maria Grazia Chiuri even had flowers pressed directly onto the garments for a collection that, otherwise, was the nth reiteration of the product-driven template she has set for the house. This generates plenty of money for Dior, but on the catwalk it can be dull.

Seventy-five percent of the Stella McCartney’s collection was sustainable. The British designer, now backed by Dior-owner LVMH, certainly has the ethical and eco credentials that consumers say they care more about. McCartney was there right from the start, back when being green was so not so fashionable. Kudos for that. And still, what has been missing from her collections for a few seasons is edge: something that makes the clothing truly catchy and fresh. 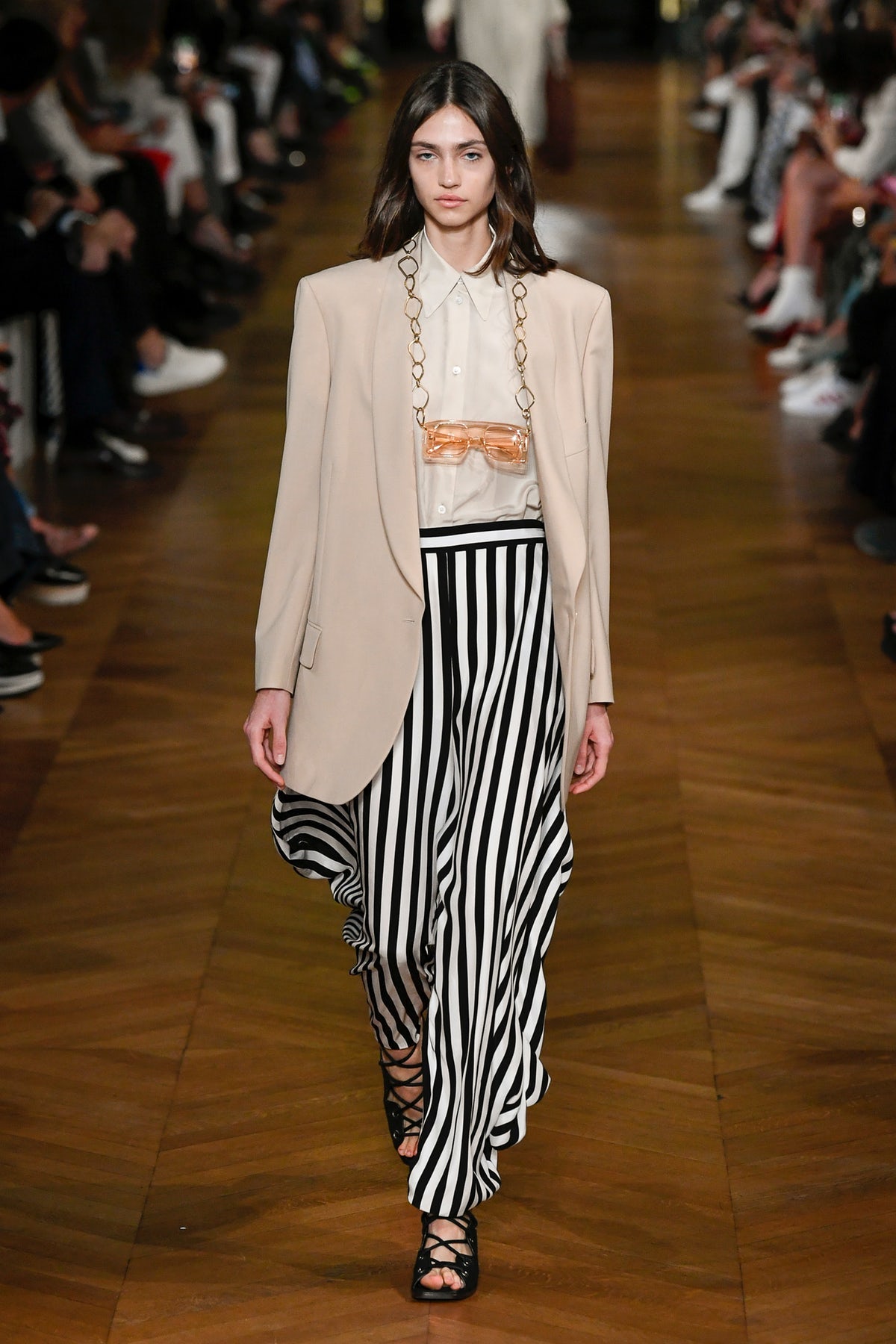 Sustainability was so pervasive, it even reached the futuristic, PVC-filled Courrèges, where Yolanda Zobel keeps messing about with the crystal clear codes of the house. Mr Courrèges was an engineer after all. Zobel's third show was highly engaging and entertaining for sure, though at times the taste level was dubious. It was perhaps most interesting in its use of fishskin in place of vinyl, because it gave sustainability a futurist spin.

Marine Serre is another futurist purveyor of sustainability: an apocalyptic one. Her vision owes a lot, probably too much, to some of the best Gaultier moments of the mid-90s yet she knows how to deliver a punch. The metaphor of the black oil spill that informed her show was quite obvious, but effective.

It was Kei Ninomiya, the mastermind of the Comme des Garçons label Noir, who truly took the ecological message to deeply evocative heights with a collection suggesting a cycle of chaos and rebirth that was composed of otherworldly creations meant to inspire more than clothe. Here, ecology was merely a conceptual frame, but it worked. Creatively, Ninomiya is still too close to his mentor Rei Kawakubo. It would be interesting to see him breaking the mould. 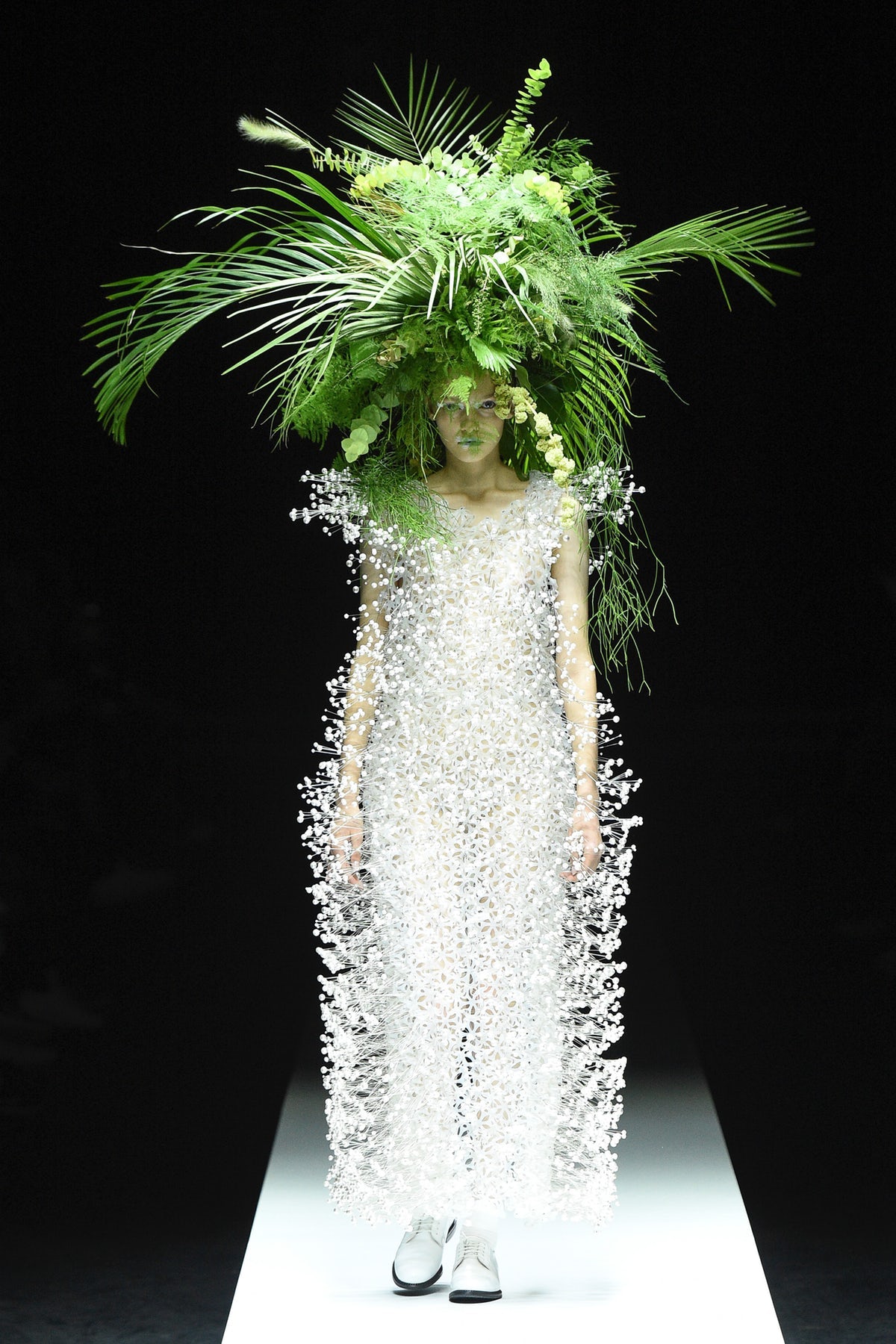 In reaction to the earthy spirit, there was also a resurgence of glamour and sexiness: fashion loves a face-off. There were collections as forcibly edgy as Thierry Mugler, where Casey Cadwallader mixed oversized tailoring and skimpy dresses in ways that were at times too reminiscent of Y/Project but scored with a casting of wild characters that were a powerful embodiment of non-standardised sexiness. Then there was John Galliano's foray into the Forties at Maison Margiela, a glorious feat of showmanship and workmanship that doubled as a powerful inquiry into the distortion of memories. In spite of all the imaginative twists and turns, however, it was all a little too literal for Galliano.

This season, there was also heavy emphasis on iconic Parisian chic from the 70s in particular. Anthony Vaccarello dug Saint Laurent’s Russian collection and “le smoking” out of the archives, gave it all his own graphically sexy twists and delivered a collection that while almost conceived on autopilot had elan. Meanwhile, reminiscences of iconic French women such as Isabelle Adjani, Sophie Marceau and, erm, YSL's very own Loulou de la Falaise surfaced over at Hedi Slimane’s Celine. Guillaume Henry scored with a charmingly flirty (and accessible) take on Frenchness in his lovely debut for Patou. For Julien Dossena it was the pop 60s at Paco Rabanne; and for Virginie Viard’s Chanel a svelte and coquettish run on the Parisian rooftops. Viard's vision for the luxury megabrand is pragmatic and product-focused. Gone are the days of Expressionism and heavy layering and heavy dreaming for that matter. Viard is all for a real, commercial wardrobe with a strong Chanel imprint. Maybe it was too commercial and lacking fashion content. Yet it was appealing, even though the accessories were not as strong as they should be. The elaborate stage sets, however, should go: they look like formula too linked to the Karl Lagerfeld past. Formulas: we saw a lot of that in Paris, and understandably so. Commercial success can lead to repetition. Isabel Marant, for instance, is a master at that: she does the same thing, over and over again, yet it is always different. Pierpaolo Piccioli has found his own formula at Valentino too: a poetic and emotional one that invariably brings the audience to a standing ovation. This season it was a visually orgasmic, aesthetically monastic detour from total white to neon to fauve print back to white: a joy for the eyes that left you craving for more but also for some change. It would be interesting, at this point and knowing his bravura, to see Piccioli break the mould, or truly push an idea to the extreme. It's what Demna Gvasalia did with an intensely and gorgeously disturbing Balenciaga show that felt potent if not entirely new or groundbreaking. Gvasalia's take on the archetype is unique, and his way to push the common to new heights almost cinematic. Yes, he has done broad shoulders and other tropes ad nauseam, but there was a level of raw polish to this outing that felt new, while the ballgowns were architectural masterpieces.

Balenciaga was quite a fashion moment, but nothing could compare to the magic of Dries Van Noten creating the collection in tandem with undisputed master of invention Christian Lacroix. This was a fashion first, in the sense that it was not a collaboration, but literally the seamless merging of two very different personality into a new whole, faithful to Lacroix’s Arlesian joy for color and theatre and Van Noten's Belgian pragmatism. In an era of cynicism and cheap marketing tricks, such an endeavor greatly satisfied the eyes, as well as the spirit. 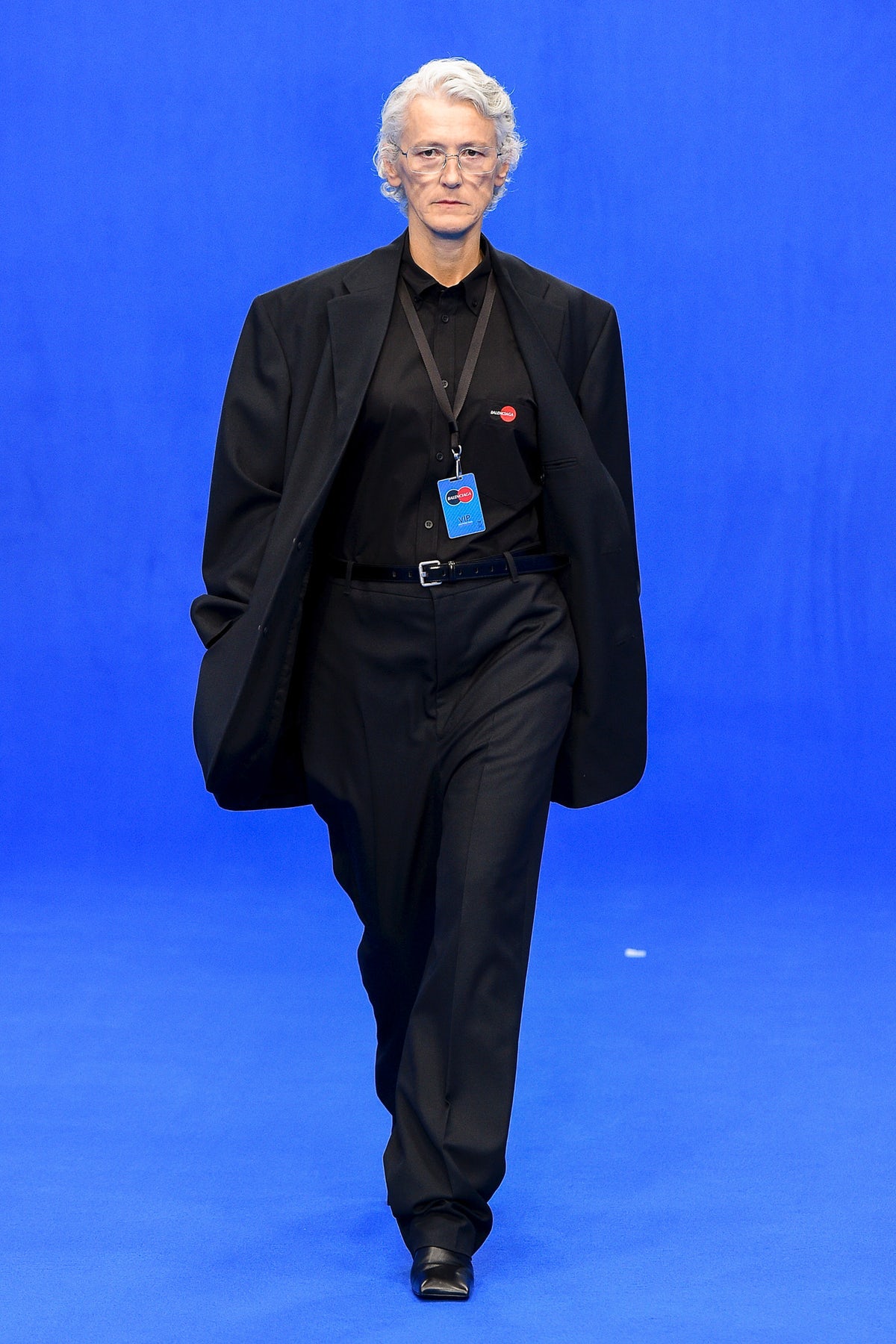 Rick Owens' Aztec by way of Metropolis goddesses proceeding solemnly in prismatic crowns, platforms and ballgowns amidst a storm of soap bubbles were another unforgettable fashion moment. A brutalist one, as Owens favors, but replete with an intense, raw brand of poetry that felt relieving. Basically, the collection was a study on colour and silhouette, and all the better for it: fashion stripped bare of everything unnecessary and elevated to pure form.

Finally, in fact, the true and best spirit of the season was all about stripping down, getting back to the essence, to fabric and manual work. Yohji Yamamoto created elongated wonders by simply draping and cutting away like the master he is. At Loewe, Jonathan Anderson pushed the brand upwards and forward by promoting a sense of aristocratic elegance with a crafty touch so deep, it was literally embedded in the details. Nothing catchy, nothing showy, just ethereal underpinnings elevated to the status of dresses. Is there anything more subtly sophisticated than this? At Alexander McQueen, Sarah Burton went back to the toile, to the time taken for making things with the hands. By working mostly in linen and guipure, and in white and black, Burton demonstrated a superb control of her creative means. She did less, and she did better, relying on the handmade as a humanistic value. True sustainability starts here.