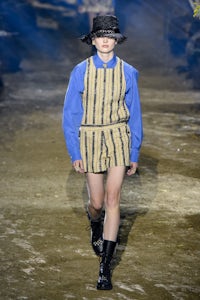 PARIS, France — “Nothing’s gonna change my world," sang Rufus Wainwright as the models made their final promenade in the Dior show on Tuesday. Ironic. Everything’s gonna change our world and that thought has been weighing heavy on Maria Grazia Chiuri. “I have a lot of doubts about the future,” she confessed. But, in the show at least, her message was as resolutely uplifting as those lyrics, originally penned by John Lennon in the full flush of long-gone '60s idealism.

In this gimlet-eyed era, idealism is taking a pounding. But credit Chiuri’s passion for drawing so many different strands into one coherent — and beautiful — vision of a better world. “Designers were used to creativity as a way to express themselves,” she said. “But now fashion lives in a very different moment from the past. With this new media, everything is different. We need a new creativity, we have to be aware. We have to be responsible.”

Like every designer who has worked under the Dior banner, Chiuri is usually looking to the magic Christian for inspiration. Here, it was his love of gardening. His feminine ideal was inspired by flowers, the famous“femme-fleur." But it was also his sister Catherine that Chiuri had in mind. Active in the French Resistance during WWII, she was eventually captured by the Nazis and deported to Ravensbrück concentration camp. After the war, she became the only female flower seller in Les Halles market. That alchemy — the beauty of nature, defiance, survival — struck Chiuri.

So did the work of Coloco, “botanical activists and ecological engineers,” who she came across in Sicily in 2018. Chiuri’s commitment to using her catwalk as a platform gave Coloco an opportunity to create “an inclusive garden," 164 varieties of trees sourced from nurseries in France, Germany and Italy as a living reminder of nature’s innate tendency towards diversity. Each tree was tagged with the longterm re-forestation project that it was destined for post-show. “With Coloco, the garden becomes an activist proposition,” said Chiuri. “It’s not just decorative.” She ran with that thought. Gardens are everywhere, they’re wildflowers and weeds, they’re the plants that creep through the cracks in the sidewalk. “The world is a garden and we are its gardeners.”

So she expanded the idea of the femme-fleur into something much more elemental: the femme-jardinier. Stephen Jones translated Christian Dior’s own gardening hat into ragged broad-brimmed straws. The iconic bar silhouette became a gardening jacket, with utilitarian cargo pockets. The roses, the lilies the marguerites of Dior’s own cultivated fashion garden devolved into wildflowers and weeds, printed, embroidered with tufts of raffia or, in one spectacular artisanal flourish, actually pressed into knits (like you’d press wildflowers in a book).

There were rope belts and espadrilles, the casual accessories of country life. In keeping with the raw natural theme, Dior’s traditional houndstooths, pinstripes and windowpane checks were translated into raw silks. Chiuri cut them into the tomboy shapes that have given her version of Dior its energy: a pert little all-in-one, a boyfriend jacket, short shorts, an easy pantsuit, all of them paired with a shirt in a shade of cornflower blue which evoked the kind of Mediterranean utilitarianism that the rest of the world considers ultimate chic.

The flowers were gorgeous in this collection. Rather than the lush florals of Dior tradition, Chiuri’s deep dive into botanicals from ages past yielded spiky, tufty plants spiralling up and around floaty, sheer dresses that swept the floor. On some of them, the bodice was embroidered with a sun shooting rays, like a pagan entity casting a powerful energy over the collection. The soundtrack, surging with Alexander Desplat’s “River,” amplified a feeling of lush ritual.

That track was from the soundtrack of “The Tree of Life,” a movie which emphasised a cosmic continuity to human existence. It’s probably too optimistic to consider a similar motivation on Chiuri’s part. I have a feeling she might love Depeche Mode. Mind you, she based the graphics in the collection on the work of a commune of Utopian artists who gathered in Monte Verita, in Switzerland, in the early 20th century. Occultists Charles Webster Leadbeater and Annie Besant’s “thought-forms”, paintings based on “what is beyond ordinary physical sight” inspired a flowing dress in multi-coloured silk that would be all a girl needed for a new Midsommar.

It made me think of a line from another '60s song. “We are stardust, we are golden, and we’ve got to get ourselves back to the garden.” Joni Mitchell was singing about Woodstock. Maria Grazia Chiuri was talking about the whole world.