After years of coasting, Sophie Theallet is daring her audience to dream. 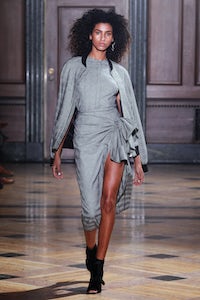 After years of coasting, Sophie Theallet is daring her audience to dream.

NEW YORK, United States —  Sophie Theallet is certainly no slave to trends. Nearly a decade into launching her New York-based label, the French designer has broken through in a way that many had hoped she would for years. While the Alaïa protégé has always been well-respected and admired by critics, the initial energy she generated in 2007 burned off. Last season saw a marked shift, however: Theallet brushed aside the noise, hired influential stylist Jenke Ahmed Tailly and concentrated on making magnificent garments filled with emotion.

Backstage after her show — which featured a considered lineup of models, including Veronica Webb, with different racial and ethnic backgrounds and body types — she said that business was up season over season. “Fashion should be open, not closed,” she said. “You should make people dream. That’s what I want to do, I want people to be able to dream again.”

The models glowed in the multi-textural pieces, like a puffed up anorak rendered in gold-metallic leopard print with contrasting leopard patch pockets, a gathered-shoulder cape in rich zebra and a halter dress made out of cut black velvet that was tied up gorgeously in the front with an oversize bow. Theallet develops all of her own prints and sources couture fabrics, bonding soft materials to stiffen them up and create something new. There was just so much to absorb with each piece. The crowd was thrilled, just as Theallet had dreamed they would be.