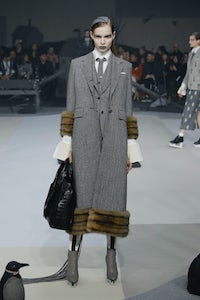 NEW YORK, United States — There have always been designers who furiously denied the label “artist”. Issey Miyake, for one, blanched when I made the connection (and he, of all people, was infinitely worthy of the label). But Thom Browne thoroughly embraced it with his show on Wednesday night. He dubbed his presentation a Gesamtkunstwerk, a total work of art.

Browne gave full credit to his partner Andrew Bolton, Head Curator of the Metropolitan Museum’s Costume Institute, for introducing him to the idea. “I thought it was a nice way to approach the world of fashion,” he said. “I like people to see I do more than make clothes.”

So, from the moment we filed into a space that was enveloped, walls and floor, in fabric, to be confronted by a bulrush-rimmed pond “frozen” in flannel, with flannel penguins and a flannel dog afloat in a flannel rowboat, we were apparently players in the theatrical impresario Browne’s production. He is, after all, a past master of fashion presentation as performance piece, his most recent menswear show being a (rather arid) case in point.

There was a similar impulse at work here. Browne wanted people to appreciate the craft of making clothes, the quality of his tailoring. But he also hoped his audience would appreciate that, even though his womenswear grows from the same sartorial root as his menswear, it was possible for tailoring to look “as feminine and sexy as a dress.”

He brought that message home with an intarsia-ed fur jacket that read “It’s too cold for a dress.” Would it be any warmer in the cuffed shorts he showed? Never mind, they were one of the items that underscored an unexpected commerciality, Gesamt-whatsit aside.

To a degree that was almost unprecedented with Browne, you could dissect this collection to find things of surreal charm, playfulness even. The colour certainly helped. But Browne also seemed inclined to lay waste to his usual (let’s say borderline operatic) formality.

By the end of the show, classic tweeds and twills had been shredded, argyles tattered and flapper fringes of buttons flew free. A suit of black boucle looked like the thick crust of flies in the Damien Hirst work on display in a gallery a hundred yards down W.37th Street from Browne’s venue. The soundtrack reflected the same surreal progression, making its way from Wagner to Kraftwerk to Marilyn Manson. Browne claimed that what all three had in common was the idea of Gesamtkunstwerk, totality of concept. That helped make a little more sense of the notion.

And so to current events. Whatever the gender, whenever the show, Browne’s models move like automatons, with a ceremonial slowness. Here, tottering on their iceskate footwear, with their plasticine eyebrows and stuck-on lips, they looked like aliens playacting at being human beings, masking their true natures.

In the current climate, identity is a touchpaper. Alien or American? The distinction has become a political hot potato. It’s a question that Browne has often addressed obliquely with his mutations of preppy dress codes. “I do like people to see that I’m an American designer,” he said. “I’m proud to be showing here. But I do hope people see there’s more than preppy — that I’m more international than strictly American.”

Those words clearly gave something like the bucolic intarsia of farmhouse, doghouse and white picket fence that decorated a skirt suit a different weight. But curiously, where there was formerly a plangent chord of melancholia in Browne’s work, this collection felt upbeat, optimistic. In troubled times, this warrior of worried has found reasons to be cheerful.