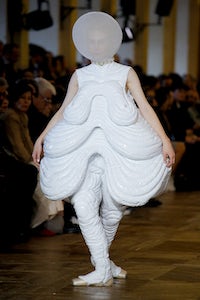 PARIS, France — The two young girls sleep under giant lunar globes, and as they sleep, they dream awake an alien world of beautiful women where they are the aliens. That was the fish-out-of-water premise for Thom Browne’s show on Tuesday, the first time he’d presented his womenswear in Paris. He felt a pressure “in regards to making sure I don’t let US fashion down”, but he also wanted something a little naïve, a little like "An American in Paris", a bright-eyed colonial take on the legendary sophistication of Paris fashion. But then the man sent a unicorn down his runway. A un-i-corn! And naivete went out the window.

Browne’s faith in the transformative power of fashion has produced some of the most arresting spectacles of the last decade, but he said he’d never felt as good about a collection as the one he showed on Tuesday. You could imagine a couple of good reasons why: a) Paris and b) Paris! Browne loves haute couture, as if you couldn’t tell from the clothes he makes under his own label, and he was keen to use his Paris debut to pay tribute to those traditions. But he also wanted to acknowledge his own roots. The solution? Choose one fabric that he felt was fundamental to French fashion and use it to make classic American clothes. So that was how tulle came to be brain-teasingly transformed into tweed and seersucker and madras and polo shirts in an effect that wasn’t strictly trompe l’oeil but nevertheless mirrored the obsessive, convincing work of a Parisian couture atelier. The madras jacket, for instance – it took one person three weeks to make, with each coloured strip hand-basted onto a tulle base. That’s reverence.

As far as alien beauties go, you might imagine all Browne’s women are such. Here, they were, as is often the case with him, attenuated, stately of movement, unearthly of pallor and slightly glazed with stardust. But the clothes they wore had an infinite variety that was something new for Browne. Despite the weighty technical challenge of turning tulle into everything else he wanted it to be, much of the collection was as light as the fabric itself, and shot through with colour. It’s occasionally been said that a Browne show is a dark fairytale. The darkness lifted on Tuesday when Browne’s models walked with a unicorn. A u-ni-corn! Yes, it was a life-size puppet created by the workshop that made "War Horse", but nevertheless, it was magic on the catwalk. And all those fashion faces lit with wonder were reminded for a moment of fashion’s power to take us away… please!