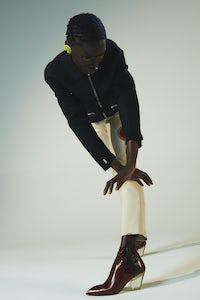 PARIS, France — Thomas Tait decided to stay out of the catwalk race this season, instead opting to present his collection in an art gallery in the Marais. The clothes weren’t even displayed on models, but instead hanging on racks. “People tend to talk about Thomas the person instead of the clothes. Now they can become more immersed in the pieces themselves,” the designer said.

You hope they will take the time, because Tait’s clothes offer so much more than a look that pops in a celebrity photograph (not that they aren’t striking in two dimensions). Luxury is often about flawless fabric, but Tait's work also reflects the designer's affinity for the kind of functionality that is prevalent in bespoke menswear — where pockets can be weighted and hidden to accommodate the wearer’s whims — but that you rarely see in womenswear. A jacket had a detachable collar that you could fold away into itself, attach around your neck or let rest over your shoulders, for example.

Tait said that not doing a show had made him design in a different way, as he wasn’t following a narrative with a beginning, middle and end. At first, he said he was worried that the individual pieces would be interesting individually but not work as a whole. But this fear was unfounded.

Some people have found it difficult to define Thomas Tait as a label. Starting out as a minimalist designer with strong sportswear influences, Tait has developed into something more rounded and interesting — a designer who is able to put a contemporary spin on luxury in a way that surprises and amuses, bit still looks chic.

In his latest collection, you could find hand-dyed ombré silk velvet trousers with detachable flares that looked like a frog’s webbed feet — which to be fair, might not be everyone’s cup of tea — amazing fur paneled coats in black or white, which changed shape according to how you buttoned them, delicate tops with multi-coloured yo-yo smocking, and a black leather jacket where the soft leather had been reserved for the inside, for the wearer. “It is so perfect that you immediately want to fuck it up,” said Tait.

While this was probably Tait’s best collection to date, there was also a bit of overlap between this season and previous ones: Spring’s target sights came back in new iterations, while a pair of dual-coloured trousers echoed a black and red pair from Autumn/Winter 2014. But maybe this is not a time to rush forward; instead Tait is letting people catch up with him. In an era when fashion needs new, interesting voices, his deserves to be listened to. 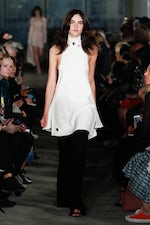