LONDON, United Kingdom — Despite the shadow of Brexit, it’s been unusually sunny at London Fashion Week. And on a balmy Saturday afternoon, Marques’Almeida, Molly Goddard and Halpern — three labels dressing radically different women — each stuck to their guns in an effort to solidify their codes, even if that meant looking backwards to move forwards. 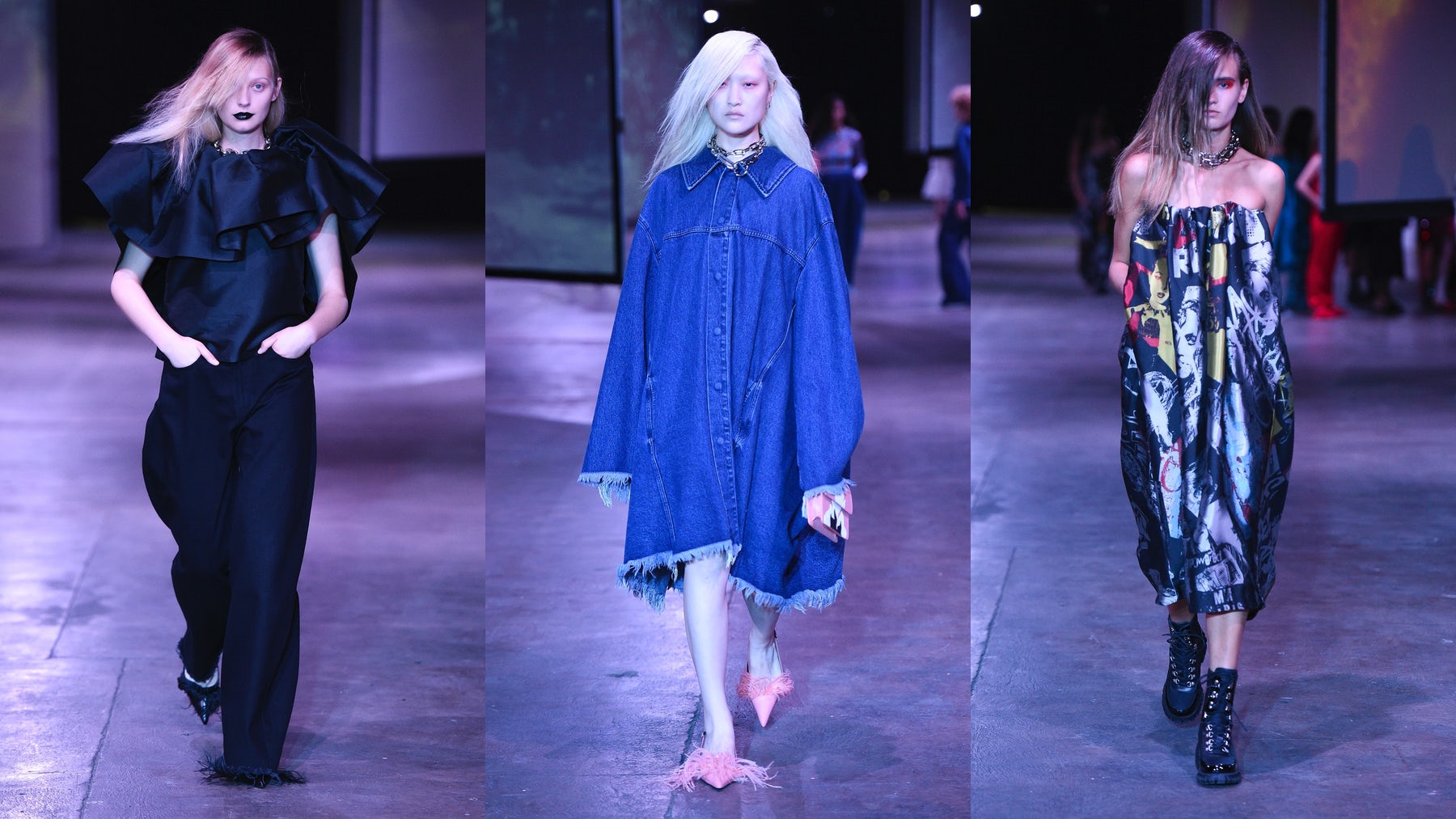 With nearly a decade of East London cred under their belts, Marta Marques and Paulo Almeida, who returned to the British capital after testing the waters in Paris last season, have built a brand identity around offsetting sophisticated volumes with raw treatments, resulting in elevated street tropes. It was gratifying to see the pair revisit some of their greatest hits with a grown-up touch today, reprising their cult frayed denim in indigo and a vivid crimson wash while applying that same distressed hemline to tulip-shaped shantung skirts and strapless dresses.

Another element that’s also core to the brand is its blend of girl-power and community-building, netting millennial customers with a diverse, size-inclusive message that often results in Marques and Almeida casting friends to walk in their shows. Today, that tradition continued, bolstered by an anarchic M-A Girls print story, a smattering of menswear silhouettes in matching fabrications, and smart styling that mixed cocktail shapes with grungy boots and jewellery that reflected the brand’s potential to draw a wide customer base: old and young, dishevelled or done-up. 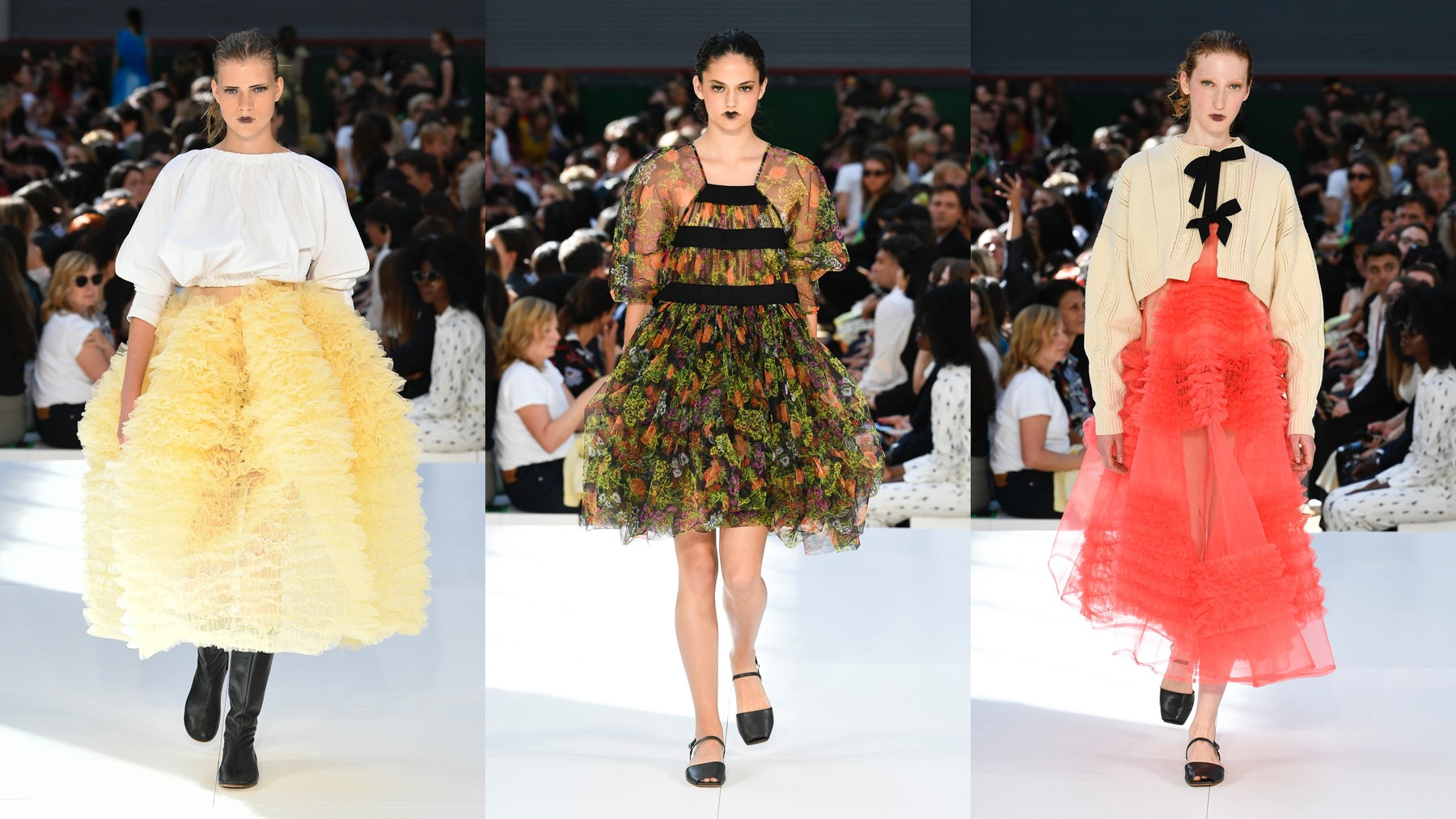 Molly Goddard’s tenure on the London scene has been shorter but more consistent. Over the last five years, the designer has built a business on the success of her colourful tulle confections whilst simultaneously honing her skills in applying the same draw-stringed, ruched, smocked techniques on garments other than those dresses. In her fifth year, she’s been feeling reflective, and, after looking back at her MA show, was determined to perfect certain elements of construction and finishing that weren’t as evident at the time.

The winning result, today, was built on her determined focus on fabric research, eschewing any complicated underpinnings in favour of crisp poplins, denim, matte muslin and her signature tulle paired with shirred sleeves and elasticated necklines to create ballooning bust shapes, asymmetric shirred tops and knotted skirts. Both knits and outerwear punctuated this collection with promise, bifurcated by cotton tape ribbons to create shape and the kind of colour contrasts that zinged in Edie Campbell’s watermelon-colourer finale dress trimmed with scarlet. In lieu of the elaborate sets of presentations past, Goddard’s latest outing took place in a narrow labyrinth of benches set up in a Marylebone gymnasium where models walked at very close proximity to attendees — so near, in fact, that dresses brushed the knees of guests able to view her handiwork up close. It grounded her whimsy and romance in a greater sense of reality than ever before. 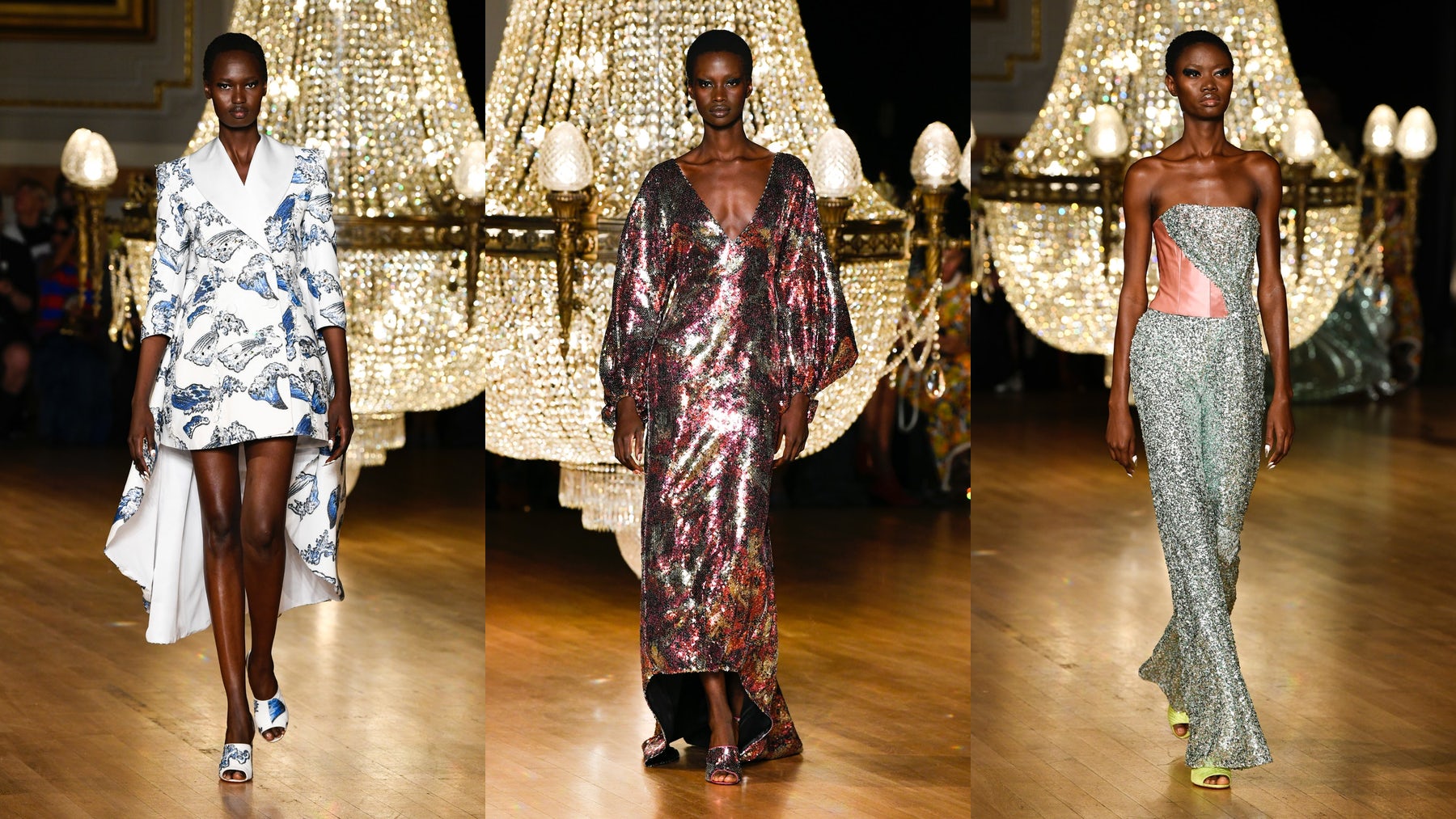 Settling into pews inside an Edwardian ballroom in Westminster, complete with large, eye-level crystal chandeliers, it was clear that Michael Halpern’s fledgling label was going for a little more pomp and ceremony this season — and rightly so when the designer’s schtick is sequined eveningwear. The Ziegfeld Follies via Barbara Streisand was his high-camp theme for Spring/Summer 2020, but things played out — believe it, or not — in a somewhat more subdued manner than seasons past. Chalk it up to the setting, the music and, perhaps, the pacing, but all elements pointed to a maturing of Halpern’s eye and silhouette here, with drop waists and Watteau backs, bishop’s sleeves and soft draped shoulders signifying a more classical romantic amalgamation of evening tropes than his usual high-octane disco leanings.

That said, the effect of the Follies still birthed wide-lapel tuxedo hybrids in white wave-scattered satin or spotty crimson, and the theatre’s marble floors inspired curved marquetry prints, joining draped gowns seemingly dipped in the nonstop sequins (matte, textured, cut-out…), lame and crystal embellishments that have come to define Halpern’s oeuvre. Amongst them, however, were some controlled moments of new construction, namely a cut-out leopard print plisse gown, its high neckline fanning out from a keyhole just above the solar plexus. It blew his gaudier leopard print gloves and booties out of the water and then some.