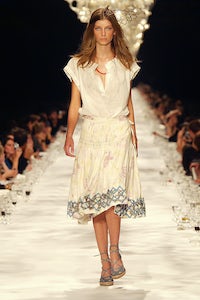 The celebration of Dries Van Noten’s golden anniversary, his 50th show, was originally planned for Les Gobelins, where the most famous tapestries of the 17th and 18th centuries were produced. That atmospheric combination of past and present would have been quintessential Dries. But a change of plans meant that, when guests for his Spring 2005 presentation boarded buses on a chilly October night in 2004, they ended up at the former home of boilermakers Babcock & Wilcox, a derelict industrial site in La Courneuve on the northern outskirts of Paris.

If you ever needed proof that fashion is our easiest access point to the miracle of alchemy, there are any number of Dries Van Noten shows that offer themselves up for scrutiny. But this one was particularly special. Long-time collaborator Etienne Russo and his production house Villa Eugenie were used to the challenge. They’d had years of experience turning sow’s ears into silk purses for Van Noten. Even so, stepping out of rust-streaked grimness to be enveloped in starkly elegant refinement was such a transporting experience that people broke into spontaneous applause. I imagine there was an element of relief involved as well.

Van Noten has always been a consummate host. Drinks and snacks were served in a reception room. A pianist played Chopin. Then thick velvet curtains were drawn to reveal an adjoining room. Cue more applause as we stepped into a cavernous warehouse bisected by a 140-metre dining table. Any time you see such space at a Van Noten show you look up to see how he brings the space down, to make it intimate: the ascending and descending curtains of hundreds of thousands of fairy lights for Autumn/Winter 2003/4, the glowing Magritte-like canopy of open umbrellas for Autumn/Winter 2006’s men’s presentation… of such visions are dreams made. Here, you didn’t have to look up too far. Hovering just above the tabletop were 130 chandeliers.

Dinner was served. There were 250 guests seated either side of the table, 500 in all, served by 250 aproned waiters with immaculately synchronised precision. We ate fish, though the food was secondary to the ceremony. When the main course was cleared, the chandeliers soared heavenwards, and the models began their graceful procession down the centre of the table to the steady thrum of Ravel’s Boléro.

It was typical of Van Noten that he felt no compulsion to match the gravity of a golden anniversary — or the spectacle of its celebration — with clothes of a corresponding splendour. No, this was a collection for Spring/Summer and that’s what he offered: sundresses, floral prints, Bermuda shorts, rope-soled sandals, flaring white skirts and loosely belted, oversized cotton shirts. Portofino in the 50s? Not so fast. The designer also cited Eastern European folklore as a reference. The embroideries and embellishments echoed folkish motifs. Again, typical of Van Noten: the plainness of washed cottons and linen was clotted with crystals, sequins and beading. Bullion-embroidered skirts were paired with dishabillé striped cotton shirts. Sun-faded tapestry prints might have been a nod to the original venue.

The models walked with woven head ornaments, almost naïve tiaras. In a charmingly off-kilter way, they suggested participants in an ancient ritual (something on the lighter side of Midsommar). There were also silk jacquards woven on antique looms in Como. That has always been Van Noten’s way: to interlace echoes of otherness in his proposals for the here and now.

He’s never advertised. Shows have always been his primary mode of communication. “So, we try to bring a certain eloquence to them,” Van Noten said at the time. This particular presentation spoke volumes. Literally. At the end of the show, shelves descended on which rested copies of a black silk-bound book, one for each guest. The book was a record of 50 Dries shows, with flyleafs in gold to match the anniversary. Every single one contained a polaroid with a view of the exact chandelier its intended recipient was seated in front of. “An emotional exchange,” one guest noted. I thought it was positively surreal.

Van Noten will go down in fashion history for the ineffable balance of emotion, intelligence and extravagance that distinguishes his shows. But you can maybe take the measure of the enormity of his 50th with the choices he made for the mise en scène of the menswear show that followed it. Bare lightbulbs dangled over a catwalk of rough wooden planks. A golden anniversary is a hard act to follow.