BoF’s editor at large travels back in time to the towering designer’s last show before stepping away from his namesake label. 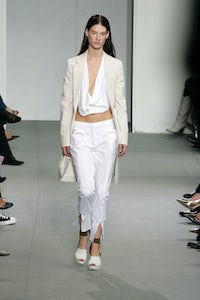 BoF’s editor at large travels back in time to the towering designer’s last show before stepping away from his namesake label.

Talking with Anthony Vaccarello last week about what Helmut Lang meant to him as a young designer made me think it would be a good moment to revisit my own happy Helmut place. But how to choose just one? Maybe Spring 2005, his envoi to fashion. Because when that door closed, another one opened, which is why we are here today, still mulling over one of the most fascinating, influential creators of the past three decades.

On that October day in 2004, no one knew it would be Lang’s last show, and if he himself had any inkling, he certainly wasn’t letting on (though he always did have something of the Sphinx about him). The day before the show, Prada had agreed to buy the 49 per cent of his business he hadn’t already sold to them in 1999. That deal closed in December. Lang quit a month later.

Hindsight was no help at all. The collection Lang showed for Spring 2005 was as far from a swansong as you could imagine. In his own words, “It was supposed to be romantic, very light, very summery, but at the same time modern and contemporary, and somehow a non-literal translation of where we started from.” Six months earlier, Bill Murray had asked Lang to design him a suit with a pair of sailor pants that the star could wear to the Oscars. It was around the same time that Helmut came across an old book of fishermen’s knots. Two and two added up to a nautical subtext for the menswear Lang showed in July: seersucker, rope belts, raffia vests that looked like nets, and sailor pants, of course. By the time the women’s shows rolled around in October ( Lang, as usual, integrated his men’s collection into the women’s presentation), the subtext had been subsumed into a complex, suggestive web of references. “Quite complicated, interesting cuts, some couture elements,” said Lang, “but the overall impression has to look somehow simple.”

Now, the seersucker was elasticated, the sailor pants were hipslung. Skirts came with the same matelot detail. Twisted fishermen’s knots and coils of cloth dragged dresses onto the bias, into sinuous silhouettes. Those same knots formed a halter neck of what looked like shells around Gemma Ward’s neck. On Vlada Roslyakova, they were twined with pearls. And pearls trimmed a fishtailed dress printed with seaspray. The tailoring was pin-sharp as ever (a black sharkskin suit its apotheosis), the draping was exquisite, with swooping necklines on both women and men. The palette was Lang’s signature dense, luscious monochrome, but there was also a vivid handful of floral-printed denim that had a deliberately surreal quality in context, like an underwater garden.

As a designer, Lang had a stronger grasp of the power of fetish in fashion than almost anyone else (and what is fashion but fetish at the end of it all?). All he had to do here was drop Boyd Holbrook into the catwalk mix: clear vinyl jeans, pristine ribbed tank, fisherman’s clogs. Stick that in your Freudian pipe and smoke it. That’s one reason why it is such an education to revisit this show now. It was never just about what Lang did, it was also about how he did it. His model casting, his use of music (here, the sensual electronica of favourite DJ Peter Kruder, a Viennese compatriot), the hair by Guido, the makeup by Dick Page…originally, it was lauded as a minimal counterpoint to the maximal impulses that were equally characteristic of fashion in the Nineties. But that minimalism evolved into something else altogether. Rigorous in concept, opulent in execution. A streamlined elegance that was alluringly timeless. I look at these clothes and I see past, present, future effortlessly, breathlessly meshed, but in a way that was so direct and real that it bypassed any hint of pretension or preciousness. “He was revolutionary,” photographer Juergen Teller once told me. When Lang took on a young Teller to make a backstage document of what he was doing, “We created a new kind of fashion photograph.”

Lang used to call his shows séances de travail, works in progress, because he felt that idea was less pretentious, more modern than the constant need for “newness” that was dictated by fashion convention. It’s a commonsensical idea too. You work at something till you get it right. When I interviewed him a year after he quit fashion, he said, “I always tried to be curious and fresh and think about things in quite an innocent fashion, and it’s extremely difficult to stay innocent when you’re in that whole fashion thing.” Did his re-invention as an artist help him stay innocent? Well, that’s what I meant about us still mulling over his motivations. This much I know: look at his work and he was a brilliant teacher. And his pupils populate the fashion landscape.

The images in this review, courtesy of INDIGITAL.tv / FashionAnthology.com, are not the full Helmut Lang Spring/Summer 2005 collection.