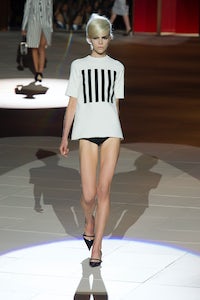 In October 1965, Andy Warhol travelled from New York to Philadelphia for the opening of his first-ever museum show at the Institute of Contemporary Art. He was accompanied by his usual ragtag band of oddballs and exhibitionists, but all eyes were on Edie Sedgwick, muse of the moment. Opening night, she wore a shocking pink, floor-length jersey tube by Rudi Gernreich, its sleeves audaciously extended way beyond the point of utility.

Marc Jacobs would have been two years old at the time. Though I wouldn’t put it past his protean genius to have clocked Edie in her t-shirt dress even at that tender age, there is definitely no way the image wouldn’t have glued itself to his mental moodboard at some later date while he was evolving into the quintessential Manhattan fashion kid, sponging up every warp and woof of the pop culture history at the city’s white-hot heart.

This has always been the main thrill of a Marc Jacobs show. The densely layered — and deeply felt — echoes of other times, places, faces, sounds and styles mean the designer has stood almost alone in New York for nearly three decades. (Only his soul sisters Anna Sui and Steven Meisel can match him for longevity and “realness.”) So picking a personal favourite from all those years is a challenge verging on the impossible. “Each show makes the previous one seem tired,” Paper magazine’s Mickey Boardman sagely observed. “Marc makes himself obsolescent, it’s a courageous and creative thing to do.” I can think of one obvious analogy, the ever-changing Miuccia Prada. But, as with her body of work, there has been one presentation of Marc’s that has stayed with me, from all of his grandslams and glamslams, the hardcore and the hypercool, that serves the purpose of this weekly exercise I’ve set myself: not necessarily the best shows of all time, but the ones that struck the most resounding personal chord. Like Marc Jacobs, Spring 2013.

Blame Edie, dancing in a glittering amphetamine haze to the Velvet Underground at the Factory, the blonde boycut, the black eyebrows, the t-shirt and leggings look that defined an era. For all her too-fast-to-live-too-young-to-die tragedy, she’s never relinquished her grip on a certain fashion sort. Cue Australian ingenue Ruby Jean Wilson, Marc’s first exit, Spring 2013. Edie incarnate! He did his usual song and dance about the influence not being literal (I often wondered if that was just for me because I was always so puppy-dog-pleased to spot his references) but it was unmissable in François Nars’ thickened eyebrows and flicked eyeliner, in Guido Palau’s hair with the side part and the suggestion of bouffant… and never mind Ruby Jean’s white tee over tiny, tiny black shorts, the whole look grounded in ballet t-bars. This single, starkly irresistible image became the takeaway of the season.

Jacobs highlighted the quintessential Manhattan fairytale of the preppy girl who discovers herself downtown.

Jacobs’ previous season was a stunning masterwork of opulent eccentricity, over-the-top Edwardiana posed against a giant ruined castle cut from paper. In his spirit of endless call-and-response self-reinvention, there was maybe something predictable about the simplicity of Spring 2013. “It was necessary after the last one,” Marc said. “Necessary to do something different.” So the first look in the shownotes was defined thus: “Ruby Jean, T-shirt, short.” The backdrop of mirrored revolving doors opened onto a sharp triangle of runway, lit by roving follow-spots. The music was “Copped It” by The Fall, with a harsh, rackety guitar sound that thrillingly channeled the Velvet Underground. The mise-en-scène awaited only its Warholian performers.

And that’s where Jacobs defied the obvious. Yes, there was Ruby Jean as Edie, It Girl Archetype. But she was followed by a parade of bizarre propriety: little buttoned jackets matched with box-pleated skirts that fell just below the knee; frilled collars or hems on mini-shifts; a dress with a ruffled bib, its three-quarter sleeves ending in a demure white cuff; long a-line coats, almost convent school. All of them with boxy little purses and pointed flats. Like proper little misses from the late 50s or early 60s, when Edie would have been going to college just like her family expected. But I did say the propriety was bizarre, didn’t I? The skirts were hip-slung. They were often matched to cropped tops (one with Mickey Mouse), and even flesh-toned bandeaux. Almost everything was shown in institutional stripes, vertical and horizontal, or toned in a palate of bland banality. And then an Op Art finale of monochrome floor-length columns, pavé-ed with sequins, a subliminal echo of Edie in Rudi at the Philadelphia ICA.

I loved the story Jacobs told. The show happened on September 10, 2012. A presidential election was mere weeks away, and that always creates a transitional atmosphere. But the transition Jacobs highlighted was something else, the quintessential Manhattan fairytale of the preppy-proper girl who discovers herself downtown, sheds her reserve and “makes a t-shirt look like a million bucks,” as Marc said. But his telling of the tale was all shadows and mirrors, more like a Lou Reed lyric, or maybe like Bob Dylan’s “Leopard-Skin Pill-Box Hat” which legend has always insisted Dylan wrote for Edie Sedgwick. Jacobs dispatched one of his models round his triangular set in an animal second-skin t-shirt dress.

The show started at exactly 8pm and finished five minutes later, stripped to its white light and white heat essence. Three weeks later in Paris, Jacobs showed his Spring collection for Louis Vuitton. The fundamentals were very similar — the tidy jackets, the hipslung skirts, the cropped tops and lean elongated coats — but there checks not stripes, sunshine yellow rather than shadows. And the scale of the show was massive, inspired by Daniel Buren’s sculpted courtyard in the Palais Royale. Led by Ruby Jean, the models came off sky-high escalators in twinned pairs, like the iconic Diane Arbus photograph, or Kubrick’s The Shining.

“Perverse,” Marc said with a laugh, shrugging off the spectacle. But wasn’t it always like that?