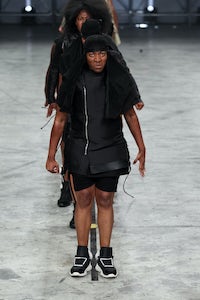 Rick Owens has often said of his women’s show for Spring 2014 that he would never be able to stage such a thing now. For a white designer to import stepping, the hyper-synchronised hybrid of competitive step dancing, cheerleading and military drill that evolved in Black colleges, to a European fashion runway would be sailing too close to the winds of cultural appropriation. But, in 2013, Owens was mesmerised by stepping culture and, as an American in Paris, he wanted to share it with the world, the same way he likes to turn his audiences on to all his passions, from opera to silent movies.

He found director Lauretta Malloy Noble and her choreographer daughter LeeAnét on YouTube. The women recruited 40 dancers from four sororities and rehearsed them for five months, with LeeAnét intensifying the performance by adding elements of Zulu dancing. When they took to Rick’s catwalk in September, they were as tight as a drum. They caused a sensation. No surprise if you looked at the show’s context: the ritual hejira of a fashion season, the barely changing calendar, the uniformity, the same faces and places.

Owens was just ahead of the curve as the industry began to take note of the need for diversity and inclusivity in its representation. The steppers in his show were mostly Black, with strong, athletic bodies that were far off the catwalk norm. Though his own model castings often challenged orthodox notions of beauty, they did tend toward the tall, thin end of the spectrum. But here, he was dressing a much more average range of body types. What’s more, they needed maximum movement. So, instead of the draped serenity that had been his signature of late, there was slashing and lacing and (un)zipping. Still sleeveless though, still draped, sometimes hooded, and still a lot of leather, though everything was trimmed to less languid proportions. And the steppers definitely gave the high-performance capabilities of Owen’s signature huge-tongued sneakers a solid workout.

But the fashion was secondary to the galvanising spectacle. The steppers entered at the apex of a pyramid and paraded down two sets of stairs, before storming through the vastness of the Bercy Arena, an indoor sports venue (whose external structure was also appropriately pyramidal.) They marched with “grit face,” the fierce expression intended to intimidate the opposition at stepping competitions, to the pounding techno of Byetone, a favourite soundtrackist of Rick’s.

He called his show “Vicious,” read by some as a comment on the nature of the fashion industry, though I could swear he told me he named it after the Lou Reed classic, “Vicious, you hit me with a flower…” Either way, the title sparked controversy. One commentator felt that putting “vicious” and “grit face” together compounded the cliché of the Angry Black Woman, replacing the stereotype of the skinny white model with another stereotype. “If I had been thinking about what was politically correct, I would have left it alone,” he conceded years later. “I wasn’t presenting Black women as Naomi Campbell. They weren’t glamazons. I was presenting them as tough and strong.” And, he might have added, real. Backstage, they were like a crowd of any young Americans thrilled to be in Paris for the first time.

It’s actually been a while since Owens expressed those reservations about cultural appropriation. On the one hand, cancel culture has continued to sharpen its claws. On the other, Black Lives Matter has sparked not just activism but painfully overdue awareness and celebration of Black culture. The road is neverending. Stepping evolved in the 60s and 70s when Black men and women were integrated into American universities for the first time. Rick’s show ended with the steppers marching out of the arena in a tightly co-ordinated human caterpillar. It was originally a chain that Black students would form to get through white rioters. “A response to adversity,” Owens called it. “Part of the history of empowerment.” That history is being expanded as you read this.