BoF's editor-at-large travels back in time to January 2012, when the menswear designer made his stellar debut on the Milan runway, taking the suit back to its sartorial roots in the military. 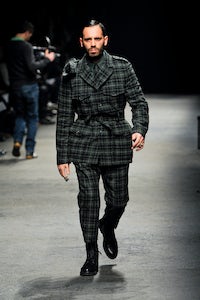 BoF's editor-at-large travels back in time to January 2012, when the menswear designer made his stellar debut on the Milan runway, taking the suit back to its sartorial roots in the military.

When I was covering collections during Style.com’s golden years, we’d pick a show of the day to highlight on the home page. The feature took on a life of its own. There’s nothing like a selection process to stir the competitive juices, especially in an industry as side-eyed as fashion. The choices tended towards the marquee names, but every so often, there’d be a wild card, to set the pigeon amongst the fat cats. And so it was with the young Turk Umit Benan, making his runway debut in Milan in January 2012. The Istanbul native was barely out of his twenties when he unloaded a menswear presentation so immaculately realised in form, so audaciously conceptualised in content that the jury at Style was left with one verdict only: home page!

That men’s season in Milan, the suit reasserted itself as the foundation of the male uniform. Benan (his full name is actually Umit Benan Sahin, but old habits die hard) took the suit back to its sartorial roots in the military. Not like that was a particularly original idea – a few months back on this page, I revisited a collection of Junya Watanabe’s that had a similar genesis – but there was a personal relevance for Benan. Turkish law insists on compulsory military service for all men under the age of 38. He’d seen his friends abide by the law. He’d also noted that their service had a positive effect on them. Umit’s long-suffering father was probably hoping for something similar with his wayward designer son. Instead, Dad had to settle for time served on a catwalk in Milan.

Benan usually based his collections on male archetypes: the hedge funder, the graffiti artist, the sports hero, the Italian dandy, the retired rocker… Quite closed little worlds, if you think about it, and that’s often how he would present them to the public, as subtle theatre. Masculinity as performance. For his Autumn/Winter 2012 collection, Benan pushed that idea to a fearless limit. The location was a rundown warehouse on the outskirts of Milan. We were curtained off from…what? Listen closely and there was some drilling going on behind the curtains. Then they parted, and we saw that the sound came from a tattoo artist working on a grunt’s arm. His buddies were sprawled on camp beds or doing push-ups or giving a punching bag the old one-two. One guy was shaving, another was showering. Stark raving naked. The audience was in a barracks Off Broadway. In Milan.

Benan described the scenario as young soldiers readying themselves to return home the day after a truce had been declared. As literal as the actual presentation was, each of the 15 looks refracted the military influence in such a way as to create looks that were civvy-ready in the best possible fashion. The first outfit, for instance, transmogrified a paratrooper suit in cashmere plaid. The necessary utility of uniforms was skilfully mirrored in the artful pockets on pants and jackets, the safari styles in particular. The cutaway elegance of a loden jacket was complemented by leather sleeves.

In fact, a perverse elegance was the soul of the whole enterprise. Benan was always adamant that he wanted to celebrate male character: bald, bearded, bulky, black, beautiful, profoundly diverse long before the industry realised its problems with representation. He himself could sometimes come on a little bit comandante with the shades, the cigars, the silk pajamas, the dozens of tattoos, the top-down road trips, but there was always a kernel of humorous self-awareness. Here, for example, he insisted he’d taken inspiration from the version of a closed male society he’d seen in the Police Academy movies. Oh, how we laughed.

And even though that home page choice in 2012 raised eyebrows, the world was taking notice. The same year, Benan was selected best international menswear designer by Japan’s fashion media. Then, waywardness slipped back into the mix. But lately, he’s been quietly focused on B+, his new made-to-measure collection for men and women. And he’s still just 40. His time is yet to come.