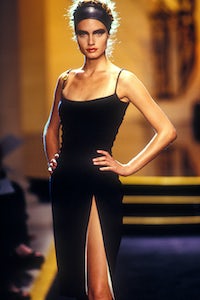 On July 6, 1997, Gianni Versace showed his new haute couture collection at the Ritz in Paris. Nine days later, he was shot dead on the steps of his house in South Beach, Miami. That violent note of finality would, on its own, have been quite enough to make the show a watershed in fashion history. But the tragic irony was that, even without the events of a week later, Versace’s show felt significant, like we were seeing a bold new direction in the career of a designer who had already reshaped fashion in the 90s.

Leaving the Ritz that night, I felt the kind of frisson I’d never experienced at a Versace show before. Gianni’s maximalism was always massively entertaining, with his insolent platoon of supermodels spinning on their heels in perfect synchronicity. It just didn’t happen to be my thing (although, curiously, as time-warped my woof, I learned to love Donatella’s transmutations of the essential codes). July 6 was something different. I was seduced by the collection’s severity. Its stark sensuality suggested a libertine sensibility brought to heel by real life’s rigours. And we knew exactly what those rigours were. A year earlier, Versace had survived a life-threatening bout with a rare cancer of the inner ear. His collections since then had had an air of reassessment about them. “I’m moving more into the reality of things,” he told The New York Times. “It’s time to step back and show clothes.” The New Yorker’s Andrea Lee described his previous couture show in January as “high church”. “I’ve had a neo-classical period and a baroque period,” Gianni told her. “And now I’m having a so-called minimalist period — a rich minimalism, though.”

Versace’s restraint was beautifully timed. Galliano at Dior and McQueen at Givenchy were stealing the maximalist thunder that year. Helmut Lang was consolidating a minimalist aesthetic that would ultimately turn out to be the decade’s most influential fashion statement. And I loved that Gianni was taking that on board. His boosters always insisted he was acutely sensitive to changes in the cultural temperature. Still, he wasn’t above a dig. You could almost imagine the fabulous bias-cut gown worn by Esther Canadas as his kiss-off to Galliano.

That glamour aside, my over-riding impression of Versace's collection was Gianni Goes Goth. No complaints here. Two-thirds of the 83 looks were black. The models’ heads were bound in black leather with a corona of angelic curls peeking out from under. Throats were similarly wrapped, like a fetish version of a priest’s dog collar. That peculiar tension between sacred and profane suffused the show. When Debra Shaw walked in a fitted black sheath, its high white collar suggested she could equally have been about to take confession. And then there were the Byzantine crosses, the collection’s dominant visual motif, inspired, Gianni said, by an exhibition he’d seen at the Met in New York. Embroidered on abbreviated black leather, they were enough to make you think Versace’s battle between spirit and flesh was surely a draw.

Eye sockets were shaded dark, lips flushed against deliberately paled skin, aside from Versace’s favourite black models, Shaw being one, Naomi Campbell unsurprisingly another. The graphic hair and makeup evoked the drama of German neo-expressionism, the consummate statement of a minimalism that looked as fierce as it was rich. Versace fired it with a finale of gold mesh, the models draped like creatures from classical myths. Naomi opened the show in a sharply tailored pinstriped suit, closed it in a short shift of chain mail with a veil. Maybe she was a bride, maybe she was a penitent. In this show, it so easily could have gone either way, and the stürm und drang soundtrack was absolutely no help at all. And yet, Versace had actually mapped out a clear path for his future. Minimalism was obviously a part of it, but a spirit of exaggeration still sneaked in: big shoulders, short skirts. I would have enjoyed seeing where that went.

And that meant I was always curious as to why this particular collection was one that Donatella never touched on as she roamed across the archive her brother had created. It was obviously a reminder of a devastating moment in her life, but then I started delving into contemporary reports of the tension between brother and sister. She was pushing for new (she wanted Karen Elson for the last look), he wanted familiar (he got Naomi). I have the feeling the Goth tinge came from her. At the same time, Gianni was acknowledging the need to evolve. There was a conflict that was unresolved backstage. Its resolution would have been the brand's future. But then he was gone, and we’re left with the Might Have Been.

The images in this review, via INDIGITAL.TV, are not the full Versace Haute Couture Autumn/Winter 1997 collection.